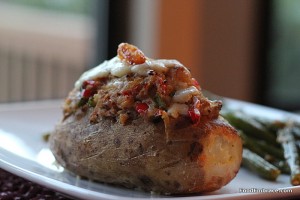 There’s been a lot of experimenting going on with crab here at the HQ. Both Scott and I adore crab and while crab cakes are tasty, sometimes you need a little more out of life.

I’ve been hesitant in the past to mess around with crab because it is a pricey protein option and the idea of messing something up didn’t sit well with me.

However I reached a point where I realized that if we don’t experiment in the kitchen we won’t grow as cooks.  And that doesn’t do anyone any good.  So in the name of Embracing Cooking, I decided to start experimenting more with crab.

And that lead to twice baked potatoes!

Preheat oven to 400 degrees, poke holes in the potatoes with a knife, and wrap in foil.  Bake for about an hour until potatoes are soft and cooked through.

Remove potatoes from oven and allow to cool enough to handle.

Cut the top off of the potato and scoop out insides into a large mixing bowl.  You want the potato to look like a boat but don’t scoop so much out the potato loses structure.

In a medium sized skillet, heat oil over medium heat.  Add in the peppers and onion and sautee just till they start to soften.  About 2-3 minutes.  Remove from heat and add to the mixing bowl.

Add in the crab, bacon, mustard, horseradish, worcestershire, and seasonings along with 1/4C of the cheddar.  Start to stuff the potatoes.  This makes a lot of filling and the potatoes will be stuffed to the tippy-top.

Before serving, heat oven to 400 degrees and line a baking sheet with foil.  Spray or brush olive oil on the baking sheet and place the potatoes on top.  Bake for about 20 minutes or until the insides are hot.  Sprinkle on remaining cheddar and allow to melt.

Remove from oven and serve! 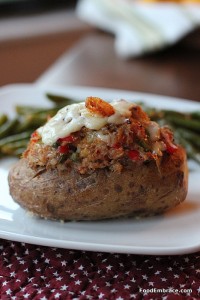 These potatoes hit the spot! And because they are large, they can be used as a main dish.  Just add some veggies or a salad on the side to round things out.

I kept the flavors similar to that of a crab cake with the use of the peppers and onion.  I knew that combination already worked so I ran with it and incorporated it into the twice baked.

The potato is very filling! So much so, that I could only eat half and saved the other half for the next day.

One reason I loved twice baked potatoes is because they can be made up to a day ahead of time, then you just have to heat them right before serving.  Add a few extra minutes to the time if they are going from fridge to oven.

They also are perfect for freezing!

Remember guys, have fun and always play with your food! Enjoy!