Hello again! I know it wasn’t that long ago that I posted, but in OHC land it was a while. :p 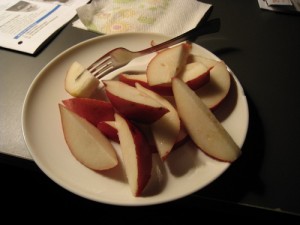 I did indeed have that pear! I like the red pears the best and I try to save them all for last if I can. I did some work and got some site related things accomplished. Then it was time to make dinner! 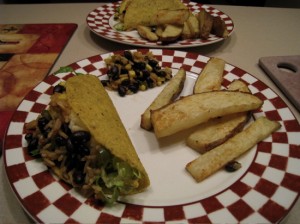 Dinner was oven fries and tacos with rice and beans. I sauteed some green pepper and red onion in a little bit of butter, added some jasmine rice and grated garlic. Seasoned with S&P, chili powder, red pepper flakes, and smoked paprika. Added some chick stock and let it cook till done. Tossed in some black beans and corn. So good! I had one taco that had romaine and Mexican cheese with the rice mixture on top. I originally planned on making sweet potato fries but I was out of sweet potatoes! Ack! There are six oven fries on my plate and I ate four. There’s also an extra wee scoop of rice that didn’t fit into my taco. My taco broke as I was eating it, so I dumped it on the plate and mixed everything up crumbling the taco shell. I went back in for more romaine and rice, when I sat back down I only had about two bites of it and I wasn’t hungry anymore so I stopped.  Scott had three tacos!

Plans for the night include going over my notes for SF in the event I have to present a demo tonight in class and then get snug once I’m back home. See you guys tomorrow!