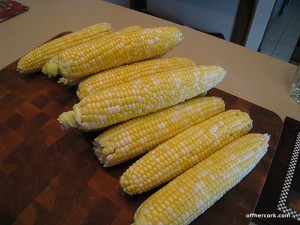 If you’ve been reading OHC for any length of time, you know that one thing I love is soups.  To widen that category out, I love soups, chilis, and stews so much that I could probably eat them everyday and be fine.  Give or take a few super hot summer days where all I want to eat is ice cubes, of course.

I’ve been experimenting with fresh corn a lot this summer.  While corn on the cob will always be a favorite, fresh corn can be used in so many other applications that it’s almost mind boggling. I have found it incredibly fun to do different things with the corn I’m getting from the farmer’s markets this year.

Once you remove the corn from the cob, it can be used in salsas, salads, or just satueed up in a touch of butter.  Each experiment always leads to the next one and then the next one.

Rose had created a corn chowder this summer and it looked delicious.  Scott has had corn chowder as an appetizer on occasion when we’ve gone out to dinner.  I knew that I could create a lovely corn chowder recipe full of veggies and accentuating the fresh summer corn.

Preheat oven to 400 degrees and line a baking sheet with foil, spray with olive oil or nonstick spray.  Place potatoes on the baking sheet, lightly toss in some light olive oil and sprinkle with a touch of salt and pepper.  Bake until they are crispy on the outside, about 30 minutes.  Remove from oven.

In a large soup pot, heat some olive oil (about 2 TBSP) over medium heat.  Add in the onion, carrot, zucchini, garlic, and peppers.  Sautee for about 2-3 minutes just till they start to soften.  Add in half the corn and stir.  Add in the chicken stock and half of the roasted potatoes.  Bring to a simmer and simmer until all the veggies have cooked and are soft.  Carrots take the longest.  Once all the veggies have cooked, turn heat to low and with an immersion blender, blend the soup until the veggies break down and the soup starts to become creamy.  Add in the beans along with the rest of the corn and potatoes.  Bring back up to a simmer and cook just till the potatoes and beans are warmed through. 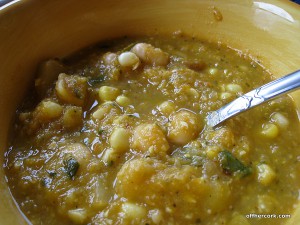 I was extremely pleased with the way this chowder turned out!  It was creamy and thick without me having to add any heavy liquid or thickener.  Hooray for immersion blenders!  I love that it was smooth but still had the texture of the corn, potatoes, and beans tossed in at the end.  I didn’t want to make a super creamy soup, I wanted something hearty and where you could see the main ingredients so you knew what you were eating.

I purposely wanted the zucchini and carrots to also show through because it gives the chowder a bit of color here and there.  The chipotle pepper and sauce give a nice heat to the background but not too much!  If you wanted to add some hot sauce on top, you totally could.  Or maybe some shredded cheddar?

If you think the chowder is too thick, add in a bit more stock until it becomes the consistency that you like.

The chowder can easily be made veggie and vegan friendly by using veggie broth or No-Chicken chicken broth instead of the stock that I used.  I’m willing to bet this would also be tasty with a few ounces of beer tossed in there. 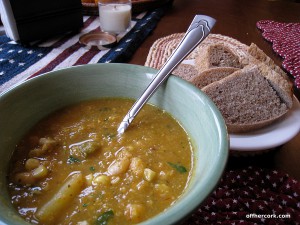 I like roasted potatoes over potatoes cooked in the soup because I think with roasting they get more depth of flavor.  They also tend to bring a nice texture to recipes and keep their shape more than potatoes simmered in with the liquids.  If you don’t want to roast the potatoes, that’s perfectly okay!  Still only use half when you start cooking and allow the mixture to simmer till the potatoes are cooked through and fork tender.

When it comes to soups and the like, my motto is Go Big or Go Home.  Meaning, I make A LOT.  This soup is no exception and it makes a good amount.  All my soups and things freeze extremely well and reheat well.  So all leftovers can be frozen and saved for another time.

The chowder takes advantage of the sweet summer corn found at the farmer’s markets and turns it into a soothing comforting meal.  A meal that feeds the belly and feeds the soul.