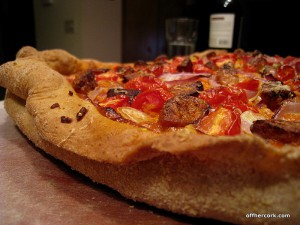 Hi gang!  How’s everybody’s week going? Mine has been so quiet that it’s been very lovely!  I’ve been working on some professional things and also on the blog.  I have some ideas for a change but am not sure quite how to implement them.  Plus my “designer” is a bit of a slow punk when it comes to getting things done.  However he does pay the bills so I guess I can forgive him a little.

The weather here this week has been amazing!  It’s like early fall with very cool mornings, cool enough that I can see my breath, and very mild afternoons.  We’ve been able to open the windows up in the house to let some fresh air through.  I’m relishing this because I hate being all cooped up in a house with recycled air.  Yuck!

Given that it’s still late summer, I’m sure these temps won’t last long so I’m trying to take advantage as much as possible!  One of my goals is to sit on the deck while getting some work done.  Doesn’t that sound peaceful?

Pizza this week was amazing and very much wanted!  I was starving by the time it came out of the oven.

I cannot cook the pizza on my own, I need Scott’s help in order to slide it into the oven and onto the pizza stone.  Since we typically have Muay Thai conditioning class on Thursday evenings, the previous routine was after I showered, Scott would shower and I would prep the pizza.  Then he would help me get it in the oven.  Now the routine is that I shower, prep the pizza, he helps me, and then he showers.  That way when he’s outta the shower, hot pizza is waiting and we can chow down! 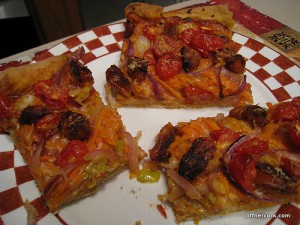 Originally I was going to have straight veggies but last night during class I felt a little bit like I was lacking energy and figured I could use some extra protein.  It was yummy and I was starving so three BIG pieces went into my belly!

Scott’s spicy pepper relish was some spicy giardiniera that I picked up at the grocery store salad bar.  I put it in my mini food processor and gave it a rough chop.  It made for a really great topping and Scott loved it! 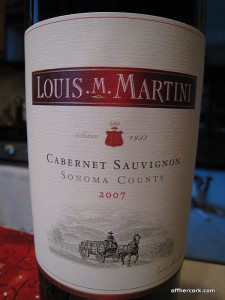 Wine for the evening was Louis M. Martini Cabernet which is one of our faves.  It’s smooth with a slight spice taste and a very dry finish.

You know we watched Antiques!  One of the most interesting items this episode was a very old clock from the 1700s which was a night time clock!  You would put a candle inside and that illuminated the time.  Very unique looking!  Sadly it wasn’t worth what you would think something from the 1700s would be worth.

After that we watched a little bit of House Hunters and I called it a night.

Anyone else have pizza this week?