Hey guys! Wow half the day is gone already and I don’t even know where it went!

I was in asleep last night before 10:30 and still woke up tired. Bah. We watched the first epi of Fringe. Heather, have you watched this yet? We need to discuss! :p

I dragged myself out of bed and then remembered I didn’t put my running clothes out so I had to gather those up. An extra chore I didn’t want early in the morning! It wasn’t as chilly this morning as it has been but it was cool enough. There was a slight mist which I love. I did my 1.6mile run and at the halfway point I was so close to cutting it short and heading home. Man I was beat! I didn’t let myself go home, I made it the full run. 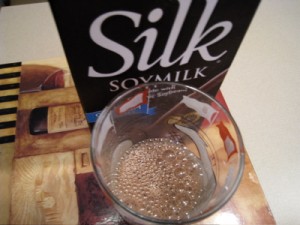 I had two sips before I snapped the pic. I was thirsty! Probably because I tried to keep my heartrate in the 160s today and my calories burned was a bit higher at the end of my run. I grabbed Rocky and we were out the door. I saw that some people had fixed their siding but a lot was still down. I wonder if they even have it or if it blew away to parts unknown. I would be nervous having my house so exposed like that. 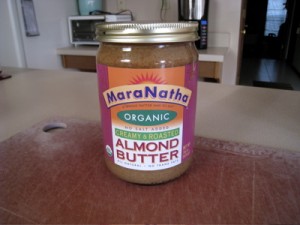 Today I officially tried the almond butter. I had a small taste before, I don’t know what I was expecting but it tastes exactly like ground up almonds, which is the point obviously. It doesn’t seem to have the same taste sensation as peanut butter. It definitely needed something sweet added to it. I wouldn’t be able to eat this plain. 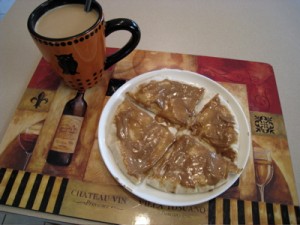 I decided to try some on a toasted pita with honey. It was okay, not better than PB though and once I’m done with this jar I doubt I will get it again. I had it alongside my morning coffee + creamer. It was very filling though and I didn’t start to get hungry for lunch until after 12pm. 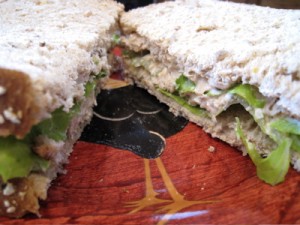 We so desperately need to go grocery shopping. We have very little in the house in the way of veggies and fruits, lunchmeats, and rice. I told Scott he had a choice, either some sort of salad concoction or salmon sandwiches with cream cheese. He picked the sandwiches. These are so easy and yummy. One pouch of salmon mixed with 2 TBSP of chive and onion cream cheese. Put on bread or eat with crackers. Yum! I use regular cream cheese but feel free to use whatever you like. 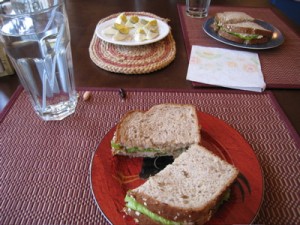 The salmon was on 12 grain bread with some romaine added for crunch. I also sliced up some hardboiled eggs and sprinkled those with a little S&P. Now I’m chewing some gum to help get rid of the salmony taste. 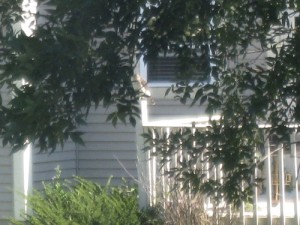 Can you see him?

There’s a hawk that lives and hunts in our little neighborhood. I have no idea why but he has his reasons I suppose. We have been trying to get a decent picture of him for the longest time. While we were eating lunch he landed in our neighbor’s backyard. Then he moved up on their deck banister. Can you see him? He usually comes out in the evenings so I was surprised he was out this early. We’ll keep trying to get a better pic!