Warning: Parameter 2 to WPE\Site_Preview::the_posts() expected to be a reference, value given in /home/customer/www/foodembrace.com/public_html/wp-includes/class-wp-hook.php on line 303
 Wednesday, September 17th, 2008 | Food Embrace

I shut my alarm off during the early morning sometime. I figured that I would sleep as long as Rocky would allow and then get up for a run. I woke up at 7:15 and decided just to get up and get moving. I had a lot to do today and I needed to get out and run. I was very tempted to stay in my warm bed, it was chilly out! But I didn’t want to fall into bad habits. I pushed myself out of bed and headed out the door. It was later than usual so there were even more people out and about this morning. School was back in session today because it had power again. Lots of traffic and typical AM noise. I wore a thermal for the first 5 minutes of my run and then had to take it off. It was so cool out this morning my hands and ears were getting tingly. I did my long run and was feeling pretty good. 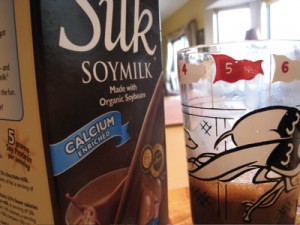 My open container of chocolate Silk survived it’s stay in the cooler. I actually drank some before I remembered I had to take a pic! Then I grabbed Rocky and we were off. Most people got their trees chopped up and piled next to the road for pickup. There was a lot more than I had originally thought. Halfway through the walk I was getting pooped! I just wanted to get back home and eat some breakfast. 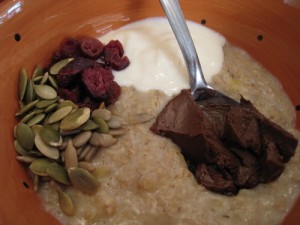 Since it was chilly and I was out of granola (don’t have enough old fashioned oats to make more) I decided to make some oats for breakfast. I made it a little too runny. I didn’t add any pumpkin (that had to get tossed) and forgot to reduce the Silk. This was 1/2 C of quick oats and 1 C of Vanilla Silk. I added a pinch of salt, cinnamon, and some vanilla extract. Half was scooped out into a bowl that I topped with yogurt, sunflower and pumpkin seeds, and Nutella! 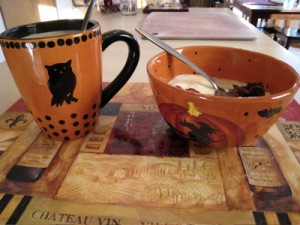 Had that with my morning coffee. Mmm coffee at home again! I don’t mind having coffee out every once and a while but I much prefer coffee + creamer at home. I could taste the Nutella a little more this time but it still wasn’t enough for my liking. However I don’t want to add a ton of it. Perhaps I need to try a different technique to increase the chocolatey goodness.

After breakfast and a quick shower it was time to get cracking on getting this site updated. Oh man but I had a bunch of pictures to go through! For some reason the oats didn’t have much staying power and my tummy was starting to get rumbly right before lunch. 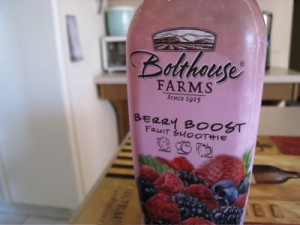 I had the other half of my smoothie. It still was overpowering and this time it didn’t sit too well in my tummy. Then I realized there were strawberries in it. Duh! I should have read the label a little more carefully. I’m allergic to strawberries but thankfully did not have a reaction (unless my stomach upset could be considered one) to this. I’m not going to get it again though. Not only was the taste too much it had no protein. That entire 15oz bottle only had 2g of protein. A smoothie should have more protein than that! After trying to not think about hunger, I gave in and made some lunch. 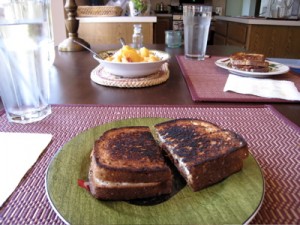 I made a quick grilled sandwich with Laughing Cow light French Onion cheese and two pieces of bacon on Oatnut bread. The bacon is another item that thawed out and needed cooked. Along side that I sliced up two of those gigantic peaches and split that with Scott. Then it was back to posting. I was starting to get sooooo sleepy. But pushed through and kept writing. I took a small break to feed my birdies outside. They were getting anxious. I have to ration their food because I’m low and need to get to the store. I also tossed out some pieces from the heel of the Oatnut bread.

More posting and editing pics when I heard Scott’s belly growl. Oo I was hungry too. Lunch, while yummy, didn’t last too long. 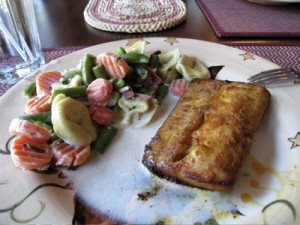 I had some raisins while I was making dinner, that I forgot to take a picture of. Dinner was some mahi-mahi that I had marinading in the fridge. Another thaw-out from yesterday. It was in some soy sauce, olive oil, and curry powder. I seared both sides and then tossed it in the oven to finish cooking. The side was some tortellini and veggies (green beans, carrots, and edamame) in a light cream sauce with shallots and the rest of the leftover bacon. Both were really yummy! I pulled the fish out of the oven and put the pan on the stove. When I was ready to plate it, I forgot it had been in the oven, and grabbed the handle. Ouch! I reacted quickly though and my hand is just fine, only a wee bit sore.

After clean up we emptied out the coolers and wiped them down. Then I started tossing ice at Rocky while we were outside and he started acting all goofy. He didn’t understand where the ice came from. :p Came inside and wrapped up the posts! Finally caught up. Whew! That took me all day.

I am one tired girl. I know I shouldn’t be, I just did posts but I think everything is starting to catch up with me and my body wants nothing but sleep! And that’s what I’m going to do. I’m off to bed to read and maybe watch a small amount of TV, then it’s bedtime.