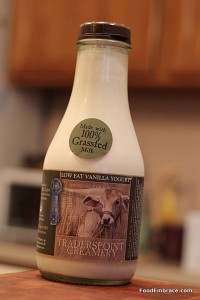 Let me start off by saying that this was the most difficult thing I have tried to take a picture of so far. I could not get a straight picture and was about to lose my cool while stomping off to get the tripod. Then I realized that the sticker on the bottle was crooked and not my picture taking.

So I apologize for the crooked picture but it’s not my fault and I’m okay with that.

I stumbled upon this yogurt from Traderspoint Creamery, while I was picking up some Snowville half and half for Scott’s coffee.  I thought this was just a milk company and then I noticed that this bottle said yogurt on it.

I’ve been looking around for a new yogurt for a little while now.  I still love Fage but sometimes I want something a little sweeter and not so thick.  I’ve been displeased with yogurts lately and all about abandoned my mission.  Then the florescent store lights shined down up this gem.

100% grassfed cows and certified organic.  Pretty close since this dairy is just over in Indiana.  I can live with that.  They have different flavors of yogurt and even have a full-fat variety.

Traderspoint advertises that their yogurt is more like European style yogurts and that it has won numerous awards.  I read the ingredient list and that was fine, so I decided to give it a try. I bought the low-fat vanilla yogurt.

Believe me when I tell you that at this point, this is hands-down the best yogurt I have ever tasted.  It is thick and dreamy.  It tastes like vanilla cream.

If this is what European yogurt is like then I want it all the time.  The yogurt I’m used to has a harsh tang to it that I know turns some people off.  I don’t mind it, yogurt is something I really enjoy.  But this? This is amazing yogurt that I swear would turn any yogurt hater into a yogurt eating fool.

I love that it comes in a glass bottle but at the same time it does make it difficult to stir the yogurt.  I used a butter knife the first time and now it’s low enough that I can just gently shake the bottle to combine everything.  It pours right out and is smooth like, well, like good cream.

I can’t get enough of it! When I pull it out, even Scott has to pour himself a couple spoonfuls because you just can’t pass it up.  So good!

If you’re lucky enough to see this creamery in your local dairy section, give it a try because it’s worth every penny.

Disclaimer: I purchased this yogurt on my own and reviewed it on my own. Traderspoint Creamery is in no way associated with this review.