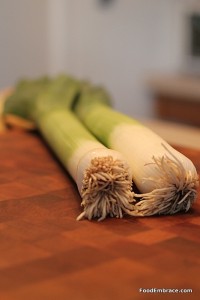 Several years ago I made the jump and tried leeks for the first time. I would see recipes for soup or recipes for pastas that had leeks as an ingredient. I never tried them though, always nervous about making that leap.

When I learned that they are basically just like a huge green onion then my mind was made up.  I love green onions so I knew that I would love leeks.

I have been getting leeks ever since, typically in the fall and winter months though.  I’m not sure what their season is but for me, my taste for them usually pops up around late September.

Which is now!  Hooray fall!

While leeks have a similiar, though more potent, taste as green onions, they take a little more effort to clean.  They grow up through sandy soil and have a ton of layers.  All these layers usually will contain some of the soil which needs to be removed.

You don’t want to eat that!

All suggestions for cleaning them say to fill a sink with water, add the chopped leeks and give them a good swishing around to get the sand out.

That’s lovely but when you want to remove the leeks, you’re chasing chopped bits all around the sink.

Not my idea of a good time so I’ve come up with a better more efficent way to clean leeks. 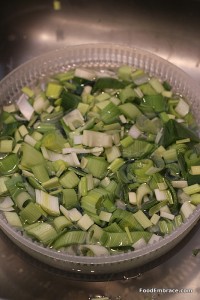 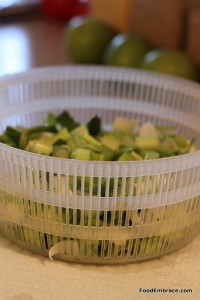 Easy and effective!  The stainer keeps the leeks together and contained.  It makes it easier to clean and then you just lift the strainer up out of the water.

Your chopped leeks stay together, they drain easily, and now they are ready to use.

You’re not chasing leek bits all around your sink as you try to remove them.

Leeks, simple and easy to clean!

Have you cooked with leeks before?  Do you like the flavor of them?