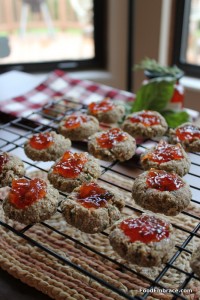 I’ve been having a grand time at the HQ lately because I’ve had the chance to experiment with recipes and recipe concepts. I enjoy cooking so very much and when I get a chance to try a new idea out it makes me very happy.

I love the feeling of creating an idea for a new recipe in my head and then turning that concept into reality.  Even better when the recipe works out!

Last week I had such fun playing around with recipes.  A group of us who love food and also love good beer get together every so often for a potluck and beer tasting session. For the next session we decided on a theme for the food (no theme for the beer, that’s whatever you want to share!) and after much debating it was decided that PB&J was going to be the theme for the evening!

Now some of you know that as a combo, I hate PB&J.  I like jelly alright and I love PB but together? Not so much.  But our potluck was flexible and you could either do a combo or use one of the ingredients in a dish.  I decided on two dishes featuring each ingredient. 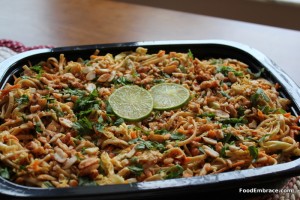 To incorporate peanut butter into a dish, I decided on a noodle dish with a hint of Asian flavor to it.  I made udon noodles with a slightly spicy peanut sauce.  There was cabbage, shredded carrots, and green onions to go along with the noodles. Scott and I had the leftovers for dinner on Sunday where I bulked up the veggie count a bit with peppers, broccoli, and added in some scrambled egg.

On Sunday I got busy and made some crackers. 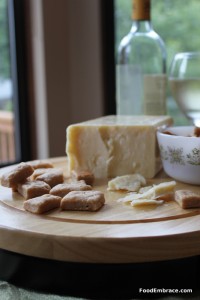 I made whole wheat crackers with white cheddar and white wine.  YUM! They smelled very cheesy and rich as they baked. Bonus is that they turned out very tasty and I’m looking forward to a wee snack this evening!

I love when I have time to experiment in the kitchen and try out new recipes and ideas!

What was the last thing you experimented with in the kitchen?