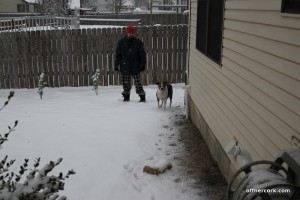 Hi gang! Yesterday was one crazy day spent watching the snow just keep piling up.  Last I checked the weather man said that it wasn’t going to hit us until about 11am. I wasn’t really surprised when I saw it started snowing at 7:30am.

I got a short run in and as I was running through the really fine fine snow that was falling, I could tell that things were going to get ugly during the day and I was right. Every place is reporting different amounts but we are in the 6-8 inches of snow range.

It snowed all day long, literally. I think it finally stopped sometime after midnight.  We have been lucky this winter so far in terms of snow fall because we really haven’t had much to speak of, this was our first serious round of snow.

Our little hobbit car wasn’t about to make it through this snow so we stayed snug at home. 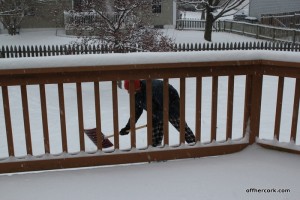 Scott was in the back shoveling out some paths for Rocky so that he would be able to go out and go potty.  He doesn’t mind the snow but he doesn’t like having to trudge through waist deep snow to potty.  Shoveling paths not only keeps his contact with the cold to a minimum, it also means he doesn’t get as wet when he goes outside. 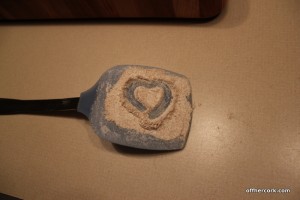 The weather outside was frightful, which made it perfect for baking and for Pizza Thursday!  I made some quick PB cookies because our neighbor used his snowblower to clear our sidewalk and driveway.  Then I got busy making the pizza.

I had a genius idea last night for a pizza topping.

Leftover burger!  Wednesday was a late dinner night for us, so I made some veggies and then heated up some frozen burgers.  Scott had a chicken burger and I had a veggie burger.  These were burgers I had made previously and then froze the leftovers.  There were two chicken burgers, Scott only ate one so what to do with the extra?

Crumble it up for a pizza topping!

Okay maybe this isn’t something new and you’ve done this before but I have not and was pretty proud of myself for finding a clever way to use leftovers. 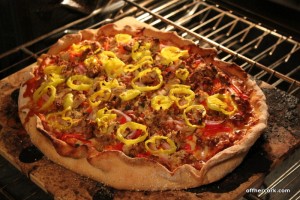 The one downside to pizza stones is that cleaning them is really not happening. Spills stay around and you live with them forever. Amen. 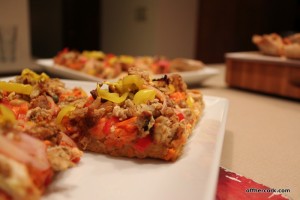 It was a little “meat” heavy but still tasty! Next time one crumbled burger will be plenty.  Perfect for a snowed in evening! 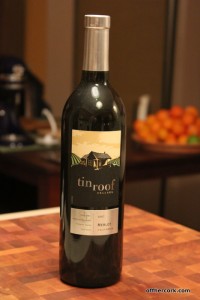 Wine for the evening was Tin Roof Merlot which was so spicy and rich that I was pretty impressed.  I have yet to think of a red as “spicy” because that is never an aspect I have picked up.  This was totally spicy and I noticed it right away at the finish.

We sipped and watched the hockey game. Let’s not discuss it, the Pens lost in a not so glorious fashion.  No one was on point, not even Johnny who I adore (you’re lovely Fleury but Johnny is where it’s at.)

How was your Thursday? Were you stuck at home too with snow?