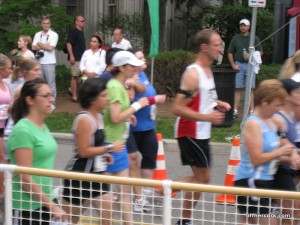 (I’m in the green top and white hat)  No Tuesday Tip today guys because I want to talk about something that I’ve been thinking about for a while now.

After thinking about it even more, this topic is two-fold.  I’ll talk about the second half in another post.

There is one thing that I sometimes see when reading other blogs whether it’s a straight up running blog or a foodie/running blog, and that is pace bashing.  This negative talk when someone completes a run and is disappointed in their pace.

I will tell you right now that I HATE THIS and it makes me cringe and not want to come back when I read someone doing it.

Pace bashing and negative talk is when someone says something like, “I ran 8 miles today at a 9:30 pace and that is so freaking slow! I know I can run faster than that.  UGH! How could I run so slow.  What a crap run.”

Have you seen that before because I see it all the darn time.

Talk like this may or may not make me want to kick you in the shin.

I get having a crappy run.  It happens to all runners.  And I get maybe having a goal pace in mind and not really reaching that during the run.  It’s good to have goals.  I can also understanding knowing that you are capable of running faster and being a bit frustrated when it doesn’t happen. I don’t get beating yourself up about a pace.

When I started running my pace was over 11min/mile.  When I ran my first half my pace was 12:30min/mile.  Yes I was dealing with two injuries but it would have been around there anyway.  I tend to run a bit slower during a new-to-me route. Whatever. When I’m running a big distance like that, my focus is on my run and not stressing about pace.  Eventually as I started losing weight my pace got a bit faster.  That’s a pretty natural evolution with running.

I am not a speed demon.  I’m not running an 8min/mile or even close.

Recently, as in last week, I realized that I ran my first sub 10min/mile pace.  I was ecstatic! Like bouncing off the walls happy because holy crap that is freaking fast.  FAST!

Then I read a blog where some chick was bashing herself for running that same pace for 8 miles.  She thought it was too slow and she can totally do better than that.

Way to kill my buzz girlie.

I’m a good runner and I’m confident in my abilities but I’m also human, and yes I can sort of be deflated easily for a minute when I see someone complain like that.  It’s like, “Jeeze if they think that is slow, then my normal pace must be like crawling to them.”

Then I got over it quickly because I’m not going to let some Negative Nancy kill my day.

I sort of want to shake them and say, “Did you forget that you just ran X number of miles? That is awesome! The majority of people don’t even do close to that in a day.  So hooray for you!”

I have been guilty of bashing my pace before and that was early on in my running career.  I stopped doing it once I realized that by writing out such thoughts and negativity, I was putting that out for everyone to see.  It had the possibility of affecting someone else in a negative way and I do not want that.  I am a supporter.  I want people to feel good about running and exercise and their accomplishments.  I do not want them to feel deflated for what they just did.

Because the truth is, we have no idea who reads our blogs.  Sure stats and whatever might give you a rough impression but the majority of people don’t comment.  What if someone is reading your blog for inspiration and then sees you bashing yourself over a stinkin’ pace?  What if they won’t go for a run because if they don’t meet your pace, they might feel like a failure?

Wouldn’t you rather support someone to get out there and do something and be a positive force as opposed to being negative and possibly discouraging another?

Why put out that kind of negative energy as a response to completing something very positive? You’re not only affecting yourself but also others that you might not even be aware of.

Stop the pace bashing and the negative running talk!

17 thoughts on “On Pace Bashers and Negative Running Talk”