Hello lovelies! I guess I could have had those red onions at dinner last night after all.  Just after I finished publishing my entry, Scott informed me that he had to work late.  Which is understandable, two weeks off of work there is bound to be some stuff piled up that needs attending.  I changed into jammies and went to bed. I read for a bit and was asleep by 10pm. It was pretty fantastic and the first time I had been to bed that early in ages.

Today I had to bust out the YakTrax again for my morning run.  The current temp was 17degrees with winds at a lovely 10mph.  Lovely is said with as much sarcasm as possible.  I have a feeling this is going to be a short run week with these stinking temps I’m dealing with.  I was able to crank out 5 miles though.

The bonus of 17degrees over 4 degrees is that my hands did alright and there was no snot dangling from my nose.  The wind was brutal though but it was not constant, thank the lord or else I would have had some serious troubles.  I came home at 5 miles just happy with the fact that I was able to get out and actually run.  I promise I’m not hardcore, just stubborn.  And possibly seriously determined.  I live in an environment that gets cold so I have to adapt and deal with it, hence running in winter.

I did get my yogurt mess this morning and it was yumtastic.  Rocky got his walk and yes he was suited up.  If there wasn’t snow I wouldn’t use the booties, but when there’s snow he has to have them for walks.  Otherwise his piggies get sore and cold causing him to lift them off the ground. 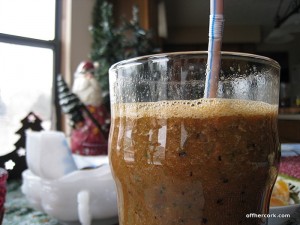 Some hummus also made an appearance at lunch.  Spicy Sabra hummus and I was able to get a container with lots of goodness on top for mix-ins.  It was extra spicy! 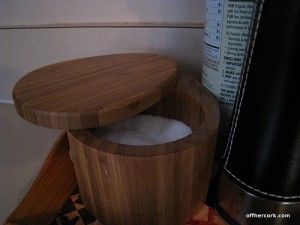 This is a bamboo salt box!  Or holder since it’s more tear shaped and not so much with the box shape.  Right now I have it holding kosher salt because that’s what I have on hand.  I’m in the process of researching and possibly switching over to sea salt as my go-to salt and only using kosher for brining stuff.  It holds a lot of salt, is pretty, and the lid helps keep stuff from splattering into the salt itself. 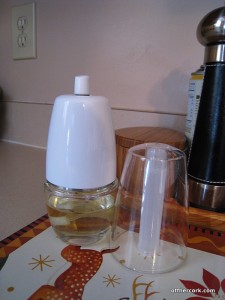 Next up is a mister sprayer thingie-hickey.  It was a random gift and not necessarily for Christmas although that’s when I got it.  I currently have a love-hate relationship with this thing.  It also was totally designed by a man, I can sense that deep in my bones.

Love:  I love it because I can use straight olive oil and spray it on to whatever floats my boat.  I love that it is glass and all the plastic that is used is BPA free.  The glass components can also go in the dishwasher which is nice.

Hate: In order for it to work, I have to pump that sucker like it’s our 6th date every single time I want to use it.  Not just a few pumps, but I have to pump it like I’m trying to pull something from the depths of a well.  It also will not hold air and be at the ready.  There is no pre-pumping allowed. You have to pump and go, pump and go!

Sound familiar?  Totally created by a dude, I’m telling you.

This is why I have the alcohol and possibly plastic containing Organic Olive Oil Pam near by.  Hey at least I’m trying, cut me some slack!

Finally able to hit Muay Thai this evening and boy was it nice to hit and kick something.  Wooo!  When we got home it was time for some Fish Tuesday!  I knew I wanted salmon but wasn’t sure what exactly I wanted to do with it.  I know some people have had bbq salmon but I never had and was curious how that would taste.  BBQ sauce on salmon, tasty or weird? 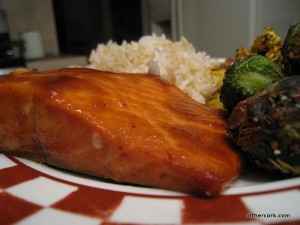 I decided to go balls in and pulled out some of my favorite BBQ sauce, Bullseye Original (no HFCS, woo!).  I combined that with: 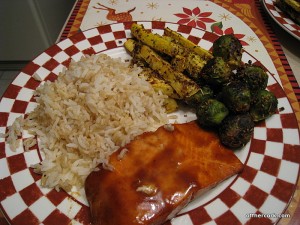 On the side was some roasted yellow squash and brussel sprouts.  Those had:

There was also a mix of brown and white jasmine rice.  The brown being leftover from Saturday’s dinner.  The salmon was just alright, I think I prefer teriyaki as a marinade instead.  I kicked that whole plate!  I guess I was a hungry beast.

Now I’m off to bed to read for a bit. I would love some tea but have no desire to wait on the water to heat and the tea to steep.  This is the one huge downside to tea, it takes so freaking long to make.  Nite pretties!