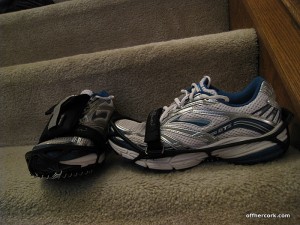 Winter of 2008 was my first year of winter running.  I knew immediately that I had to get some YakTrax in order to survive it.  It was not even a question but more of a fact.  In order for me to continue running through the winter, I needed the proper gear.  Enter in YakTrax.  I had been searching for some for some time because when it snows they tend to sell out quickly.  I have average foot size, so the size I need for my shoes tends to be the first to run out in stores.  Running stores carry them but in limited quantity and sporting goods places also carry them.  Naturally, you can purchase them online as well.  I happened to come across a pair at the Eddie Bauer Warehouse store and snatched those suckers up right quick.  I haven’t looked back since.

For those that don’t know, YakTrax are things that slip on the bottom your shoes providing better traction and stability when walking in snow or on ice.  The bottoms have metal coils which are what provide the additional traction.

There are two kinds of YakTrax, the walkers and the Pro Version.  The Pro Version has an extra strap that goes across the top of the foot for added support for more vigorous winter activity.  Like running!  The Pro version is the what I use for running. 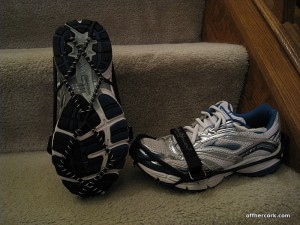 They might not look like much but without them I wouldn’t be able to get any outdoor exercise in other than walking my dog.  They work extremely well which is probably why if you ask a runner what YakTrax are (unless they live in warmer climates) they will know immediately what you’re referring to.

The first time I used them, we had just gotten some snow and it was my chance to test them out.  I had run in snow and ice before this and I can assure you it is not fun with regular old running shoes.  I was excited and nervous to test them out.  Excited because “hooray, using new running gear!”  Nervous because would they slow me down or feel heavy on my foot?  Would I be clod-stomping around leaving sasquatch tracks in my wake?

They were awesome and I don’t know why I had my doubts.  They helped me get through the snow, allowing me to feel more confident with my pace and stride.  Since I wasn’t so worried about slipping and falling anymore, I could go back to focusing on my run.  They are not bulky and you can’t even tell you have something on your shoe.  I have used them in light snow, heavy snow, and ice.

YakTrax should be used if there is an inch or more of snow and you will actively be running in it.  If there is a dusting, your regular runners will be fine.  You shouldn’t run with your YakTrax if there is no snow or ice because the hard impact could damage the metal coils which will result in the YakTrax being less effective.  Occasionally I will hit a patch of road or sidewalk that doesn’t have snow or much of it, at this point I will actively seek out some snow for cushion.  Even if it’s just some slush, anything to help put a barrier between your YakTrax and the hard surface.  Sometimes I won’t have that option but thankfully it’s only for a super short distance until I can hit some snow again.

Scott has the walker version and he said that they have slipped off his feet before.  I don’t remember this happening to him but it must have, so I’m putting it out there.  I have no had a problem with mine slipping off.  However, I have had them slide to the side of my foot and get off-center.  This only happened once and it was during a trail run through 7 inches of snow.  The terrain was very uneven as you can imagine and my feet were going in all directions causing the YakTrax to slide a bit.  I have never had an issue with them otherwise.

My suggestion is that if you do get some, practice putting them on before your run.  They are tight and take a little muscle and elbow grease to get them on your shoes.  Exercise time is precious and you don’t want to waste 5 minutes or so just fiddling with getting these on.  You could even put them on the night before and have them ready if you know there will be snow.

They are also easier to put on when you are wearing your shoe.  Since I have the Pro version, I make sure that the strap is tight but not too tight to interfere with the movement of my foot.  If it’s too tight you will feel it right across your toes, not a good thing when you are looking to crank out a decent run.

You know you want some!  Go out and get yourself a sweet pair of YakTrax and rack up those snow miles! They are not expensive and considering it should be a one time purchase, it’s money well invested.

12 thoughts on “Why I love my YakTrax”