Hi gang! For those who check out my Twitter, I mentioned last night how I was still hungry and wanted something to eat.  I realized that this actually wasn’t true and my brain had yet to catch up with my stomach, so I hauled myself off to bed.  I read for a while and then I could not keep my eyes open any longer, I had to go to sleep! I was asleep in bed before 10pm.

I slept till 7am this morning, so that’s what, a good 9hours and some change.  Sweet! Although I did have a bit of a sleep hangover this morning and was stumbling around trying to find my balance.  Total sleep bender!

I was out the door for my run by 7:30 and oh my goodness it was sooo cool I couldn’t believe it!  I had to bundle up with pants and a shirt!  I ran five miles in 54 minutes which isn’t too shabby.  My legs were a bit tired this morning, and my right thigh was a bit slower because yesterday in MT, it took a nice kick.  It’s a little tender. :p 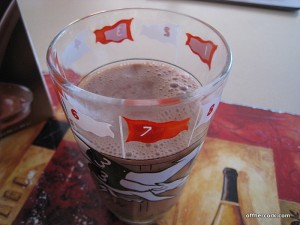 I slammed a huge glass of CS and took Rocky for a semi-short walk.  I was just too cold to go longer!  I even put a sweatshirt on for his walk but brrrrr, chilly!  And my ears were starting to hurt, which they have a tendency to do when they get too cold.

When we got back home, I stretched and took a long glorious hot shower.  Then it was time to refuel.  Since we are low on yogurt, I did something a little different today. 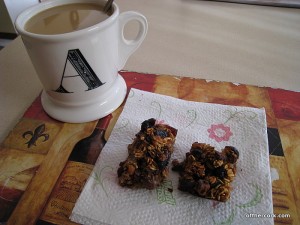 I decided to have two of the oat bars I made last week.  Including the small one I had before my run, that makes 3 oat bars today.  I’m addicted! They have everything I need, whole grains from the oats, sweetness and fruit from the cranberries, and protein from the nuts.  Plus chocolate, so how could I go wrong?

I sat down on the couch and checked blogs while watching Food TV and eating.  I wasn’t down long though!  I got up and got busy in the getting to putting together a veggie chili.  I tossed that in the crockpot to simmer and get delicious all day long.

By this time Scott was up and wondering what the fabbo smell was all about.

Since he was up, I got started on Sunday Breakfast!  I went the super easy route today.  I was feeling very laid back. 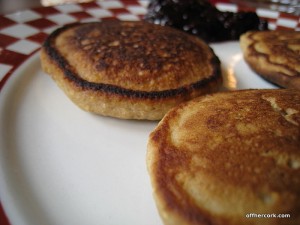 Pancakes that I pulled from the freezer and heated up.  These were apple cider cornmeal pancakes.  With a small dollop of blackberry sauce in the background. 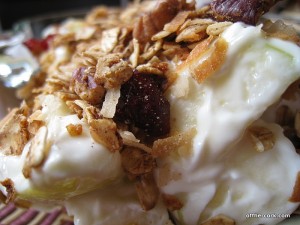 I used the last of the yogurt to make parfaits for us.  A huge golden delicious apple, yogurt, a bit of maple syrup, and homemade granola.  YUM! 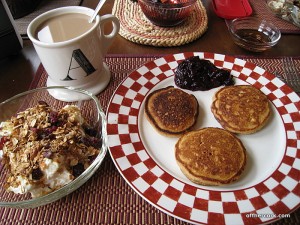 Cleaned up the kitchen and then plopped my butt on the couch to do some blog stuff.  After a while I needed to get up and get moving around.  Rocky was a little restless, so I took advantage of the day and we went out for another walk.  Still chilly!  I wore sweats and loved it. :p  I love love love fall!  I would gladly give up winter and sub in fall weather that whole time.  Someone even had a fire going and it smelled awesome.

When we got back, I fed Rocky and then got started on doing some stuff for dinner.  Nothing major since the main dish was made. 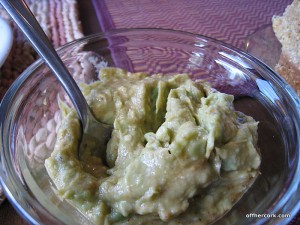 I made a quick guac to go with the chili.  And put out some chips as well. 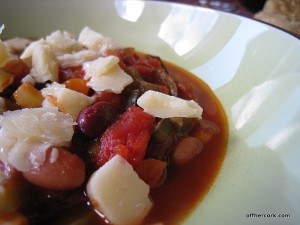 Veggie chili!  It has four different kinds of peppers and three types of beans.  Plus carrots, corn, peas, and onion.  So delish!  I made a big huge batch of it too.

I also cooked up some ground beef and pork earlier today.  Saved some for Scott to add to his chili and froze the rest for later use. 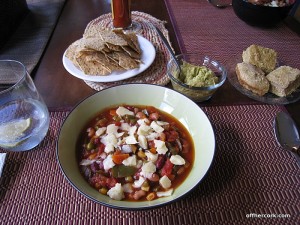 My portion was meatless and topped with a bit of cheddar cheese.  It was so good and totally spicy! :o  Scott surprised me by asking for less meat in his next portion.

Just let me be clear, I’m not a vegetarian nor is Scott.  And while I only want meat products on occasion and small portions when I do have it, I have no problem at all making a meat dish for my husband.  As you have seen me do numerous times.  Him wanting to eat less meat is a decision he is coming to on his own and something I support.

After dinner, we cleaned up the kitchen and then I cut Scott’s hair.  Now I’m chilling in my jammies!  I’m hoping for a glass of wine and a movie in my near future!

Hope you guys had a great weekend!