Hi guys! Today started bright and early at a little after 7pm.  I crashed hard last night and only woke up once the entire time.  After taking care of Rocks, I immediately poured myself some coffee.  It’s Monday which is my rest day and thank goodness because I was tired! 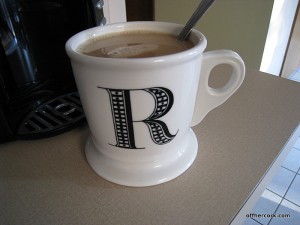 I flipped through pictures from yesterday and worked on my post.  Scott took so many pictures it took me a while to see everything.  Plus find all the food pictures. :p  Once Scott got up I made some breakfast. 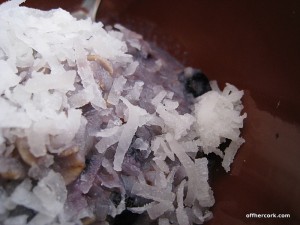 Oats! I have been craving oats and my body has been craving oats like nobody’s business.  I think my bod wants to get back on track and back on schedule.  We’ve still got a few more days of crazy fun stuff planned but after that food is going to be simple and fresh all the way. 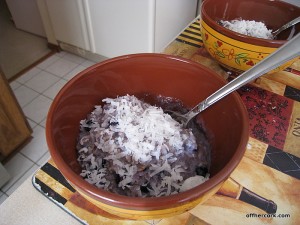 Basic oats today with blueberries and coconut on top.

Either I’m not giving myself enough of a portion or I just need to make more because oats are not holding me over.  By 10:30 I was already hungry again. :o  I waited though because we were going out to lunch.

I tossed a load of laundry in and got dressed while Scott made a quick run to the Hobbit Car Shop to get the oil changed.  When he came back we were out the door.  First stop was an alterations shop so I could get some pants taken in.

There is good and bad news, so I guess it’s kind of mixed!  The pants are unable to be taken-in.  They, um, would have to be taken in so much that they would look odd and not flattering.  The lady flat out told me that it wouldn’t look nice. The back pockets would be touching or overlapping and that isn’t good.

At least she warned me and not just did it and took my money.  I have to appreciate her honesty.  So the good, I’ve done so well with my new lifestyle that I’m unable to get my pants taken in.  The bad is that now I need even more new pants.  And the even worse, is that I never got a chance to wear these pants. Booo

After it was decided that none of the pants were going to be altered, we headed off to lunch.  A new place for us, Tip Top Kitchen in downtown Columbus.  We hit just after the lunch crowd so the place wasn’t too packed.  It was a perfect experience!  We got seated right away and the place was cozy and inviting.  There was music but it wasn’t blaring at you making it hard to have a conversation.  It was just sort of background noise to make things a little more relaxing.

I first came to hear about this restaurant via Twitter.  Specials and menu items are posted always making me drool!  Especially since they also have loads of veggie dishes or dishes that can be made vegetarian.  Oh yeah!  We sipped on water while looking over the menu.  Scott was discussing all his possible choices and when he said “the philly cheesesteak”, I have to say my heart skipped a beat.

My husband can eat whatever he wants.  I’m not the type of wife that is going to get on him about something or be all, “Well could you make a better choice?” He’s a grown man and can do whatever.  Imagine my surprise and delight when he said that he was going to get the cheesesteak vegetairian style. *squee* 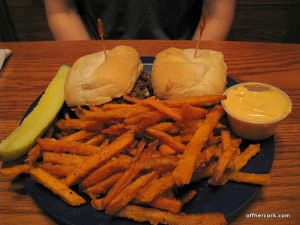 It was made with a vegetarian steak substitute and he got sweet potato fries on the side.  I will tell you right now that with my fork, I snagged a few bites of the insde and it was so good!  Tip Top’s veggie cheesesteak rocks!  And their sweet potato fries were fabbo as well!  That was my first time trying sweet potato fries out and I was totally pleased.  Crunchy and slightly salty, great combo! 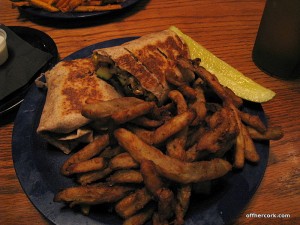 I got the veggie wrap which had:

A bit of cheddar-jack cheese wrapped in a multigrian or whole wheat tortilla.  I’m not sure which but it was not a plain white flour tortilla.  I got eggplant fries on the side.  Eggplant fries!! I can’t even begin to tell you how amazing these were!  I think there might have been a type of coating on them but they were so good!  Creamy and full of flavor.  I had to stop myself or I would have inhaled my entire portion.

I had only 1/2 the wrap though, it was totally jam packed with goodness and very filling.  The rest of my wrap, fries, and Scott’s fries got boxed up to bring home.

We loved Tip Top! It was a perfect lunchtime restaurant for us.  It was quiet and cozy with plenty of veggie options.  If you’re looking for an inexpensive place to get a meal or grab a drink, try Tip Top!

After eating, to help digest my heavy lunch, we walked around downtown for a bit.  Then we headed over to Dublin and walked around down there.  Before we left Dublin, we stopped at Jeni’s ice cream! Which is another new first for us.   I had the hardest time picking a flavor to bring home.  Everything seemed so delish!  I finally decided on a flavor and Scott bought a cone for the road. 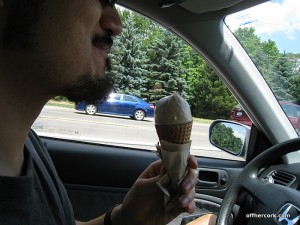 It was a coffee and dark stout combo. It was actually pretty good with the flavors being very subtle and hitting you at the end.  I snagged a few licks but I was still very full from lunch so I didn’t have any more than that.

When we got back home, we ran Rocky out for a quick walk.  Now we’re home kicking it back for the rest of the day.  No idea what supper will be because I’m still full from lunch!