Hi guys!  As we were talking about dinner, Matt the Miller’s Tavern came up again.  They have fabbo salads, are close to us, but the clincher was the awesome bread that comes to your table while you wait!

Carb Train was in full effect! I wanted some of that dangum bread!  Off we went!  We were hoping to sit out on the patio but it was full by the time we got there.  Boooo!  We were seated inside which ended up being a blessing in disguise because we got the same server we had last time we were there.  She’s awesome! And hands down the best server we’ve ever had and that ain’t no jive yo!  And she totally remembered us, which how often can one say that?  Score! 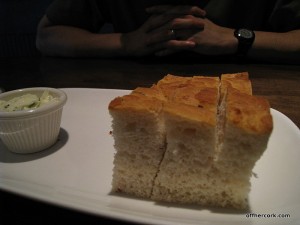 The carblicious bread arrived! I picked at it a little bit and this time I decided to see what the butter was all about.  I just had a smidge here and there on the bread bites but it was enough.  It was an herb and garlic butter which tasted amazing.  Totally flavorful and super creamy! 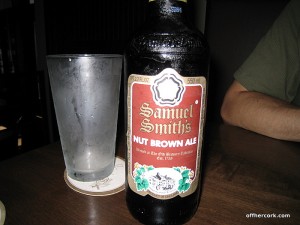 Scott started off with a monster bottle of beer. He seems to have this knack for picking the biggest beers!  It was a nut brown and it was just okay.  Sort of had a little bit of a bitter finish too it which wasn’t ideal for me. 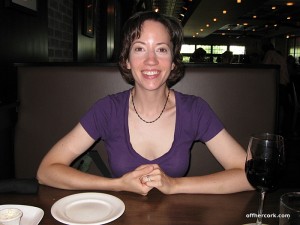 Then my wine came!  I’ll say it again, the wine pours at Matt the Miller’s are very generous and worth every penny.  Can you see my wine over on the side?

We got an appetizer of their hummus plate with flatbread and grilled veggies. 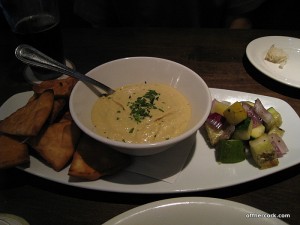 Neither of us were real thrilled with this.  The hummus was very creamy but almost had a sweet taste to it.  I prefer hummus to be savory with lots of garlic.  The flatbread was fried and the veggies had an odd taste to them.  I had one piece of flatbread and then a couple pieces of the other bread dipped in the hummus.  The hummus serving was huge! And we brought the rest home. 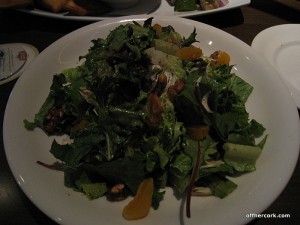 I ordered a starter salad with my meal which was the Matt’s salad.  Mixed greens (and again, actual mixed greens!  Hooray!), walnuts, chopped apricots, and a maple mustard vinaigrette on top.  It was delish! Although towards the end the vinaigrette got a little too sweet for me.  I might stick with the Balsamic salad next time. 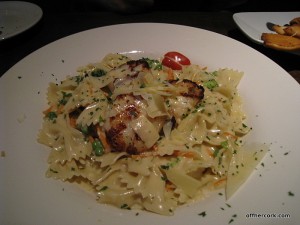 Scott’s main dish was a scallop and pasta dish with a creamy garlic sauce.  Fabbo!  I had a small bite of scallop with sauce no pasta.  It was really tasty and Scott said it was probably the best scallops he’s had out for a while. 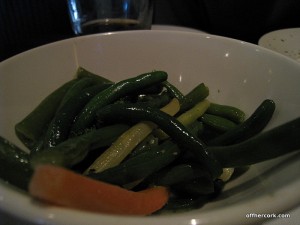 He also got a side of veggies actually for me.

But we forgot to ask for no butter and they were swimming in it!  Whoops!  I had a green bean and that was all. 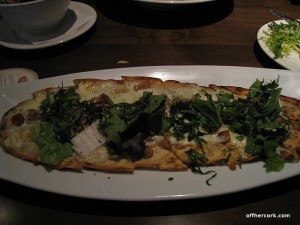 I got another flatbread for my main dish and I only had two slices, each the end pieces.  I was stuffed! And there was a bit too much cheese for me.  It was a pear and Gorgonzola flatbread. Doesn’t that just sound amazing?  Gorgonzola cream base, roasted pears, and then more moz on top with mixed greens, tarragon, and a raspberry vinegrette.  I didn’t even think there would be more cheese on top or I would have asked for none or light on the cheese, because the Gorgonzola is enough cheese for me really.  It was a really interesting flavor combo and so so good!

There was plenty of leftovers that we had packaged up to bring home.  Scott asked if we could get extra bread to take home too and our server said yes!

We absolutely love this place! It’s rare that we hit restaurants more than once and when we do our second experience usually isn’t as good as the initial experience.  This was amazing both times!  If you live in Dublin or close to it, I highly recommend trying out Matt the Miller’s Tavern.  The food is excellent and the service is superb!

After dinner we walked around Garden Ridge for a bit and then headed home. 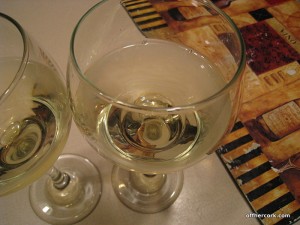 Scott poured us some white and we sipped on that while watching Hot Fuzz.  Love that movie!  Then I hit the hay and crashed out.

Last night was the last stop for the Carb Train!  I’ve had my share and my belly was so bloaty letting me know it was done with the carbs too.  I felt okay other than eating too much (umph) but I’m not normally all bloaty like that.  And please don’t misunderstand me and think I’m a carb hater or a no carb person because I’m not.  I just don’t personally prefer to eat much pasta and breads.  I prefer carbs in the form of whole grains like oats and brown rice.  But I also don’t like to eat it several days in a row (except for oats!) because my body doesn’t respond well to that.  But that is me.  Everyone is different and you may do well with carbs.  My husband does!