Hi guys!  Last night after SF class, I came home and made myself a wee snack. 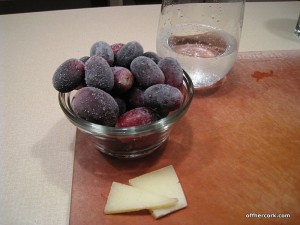 Seltzer kicking it in the back

Frozen grapes and two small slices of sheep’s milk cheese.  So tasty!  Naturally I did not get to bed early because I wasn’t tired.  Figures.  It was after 11pm when I hit the hay because I was enjoying some snugs and King of the Hill and then Family Guy.  Scott and I are a little disturbed by the fact that on King of the Hill, we understand Boomhauer a lot better now.  Is this because of years of watching King of the Hill?  I hope so because some of the other alternative answers aren’t as appealing.

One of the KoH episodes that we watched last night, Peggy and Bobby were playing Don’t Spill the Beans!  Holy crap guys, I totally had this game.  I have never ever come across another person who has even heard of this game let alone played it.  I was in heaven.

This is the version I had as a kid, not the new version with the weird cracked-out looking kettle type of thing.  In my search for a Don’t Spill The Beans reference, I came across Don’t Break the Ice, which I also had and no one else did.  I guess everyone else had games like Cooties. While I was busy learning about about strategy, patience, and balance in life, everyone else was catching Cooties.  That pretty much sums up my high school career as well now that I reflect on it.

After my trip down memory lane, I went up to get some Zs.  Since there is no running today, I got to sleep in a little.  Rocky allowed me to sleep-in till after 8am.  Thanks kid!  Once he was taken care of, I headed into the office with my mug of dark love. 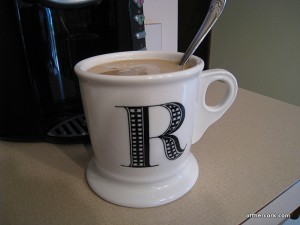 I’m talking about coffee, my other dark love was still in bed sleeping.  The Interwebs called while I was sipping on the Joe.  Then I was off to get Scotty up for the day.  Finally it was time for breakfast where what I thought was a tragedy turned into bliss. 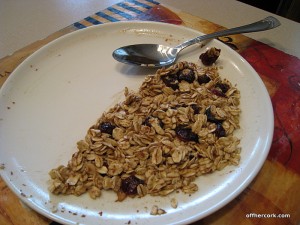 I attempted to make Gina’s breakfast cookie.  I prepped it last night but after the fact realized I had used too much soymilk.  I actually had to drain some off. :o  In my defense, I started off with a small amount but didn’t think it was enough to soften the oats so I added more.  After I put it on the plate and already drained some of liquid, it still seemed too soft.  I put it in the fridge and let it do its thing anyway.  This morning it was still really soft and not cookie like at all.  I almost had something else to eat but decided to give it a try.  It was awesome!  Never in a million years would I have thought that I would like cold oatmeal but this was fantastic.  I ate it with a spoon and gobbled it up.  It has some cranberries in it for texture and sweetness.  Mmmm I actually think this might become a summer staple for me.  It will allow me to still get oats in without the ickiness of the hot bowl.  I had given half to Scott and he’s only lukewarm on this version.  Fine with me, that means I get more! :p  I’m going to prep another tonight for cold oats tomorrow after my run.  Whee!

Once breakfast and a little bit more coffee were consumed, I leashed up Rocks and we headed out for a monster walk.  Probably 2.5 miles at least.  It was cooler today and since I didn’t run, I could go farther.  Truthfully he should be getting this amount daily so I’m going to strive to do that this summer.  Back home and back in my jammies because I would be cleaning later.

I sat down for about 20 minutes and got up to make lunch. I was starving! Half a plate of cold oats didn’t last me long at all.  Lunch was leftovers. 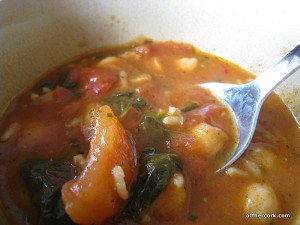 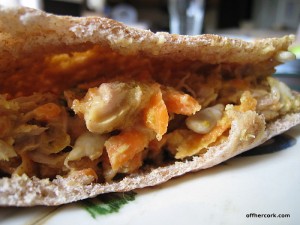 Tuna in a pit 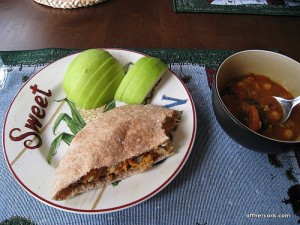 And half a green apple.  I ate everything and while all of it was delicious it was not satisfying.  I was trying to be quick and keep dishes I would have to wash to a minimum.  This lunch left me lacking.  I need more fruit and veggies.  And I need those veggies to be raw.  Just some shredded carrot wasn’t cutting it.  I’ll probably make a smoothie in a bit to help fill the gap.

Now I must finish cleaning this house! Later gators!