Hi guys!  We didn’t sit down to dinner until 10pm last night. :o  So that’s why there was no post up!

After I got done with my morning post, I went into the kitchen to make a snack.  I was still a bit hungry! 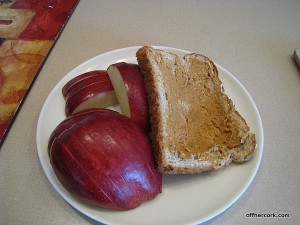 A slice of 12 grain bread with PB and a big sliced apple.  Rocks and I sat on the couch sharing my snack and I also iced my knee.  Scott was a love and did the dishes for me.

Then we pretty much chilled the rest of the day.  We watched TV and later in the afternoon I had another snack. 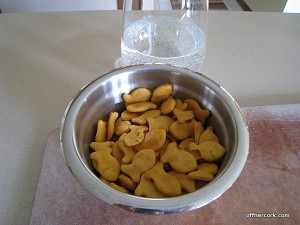 Fishies!  Whole grain and those were all mine, I wasn’t sharing. :p  We watched more TV and then played some Lego Batman.  I told you I was wiped out!  My body was just like, Uh, I don’t know what happened earlier but we need to just lay here on the couch.

I talked with my mom for a bit and then decided to take advantage of the weather and grill!  It was late in the evening when I started prep which is why it took so long for us to eat.  I was ready for dinner too by the time we finally sat down. 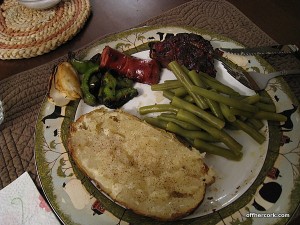 Steaks!  Oh yeah!  And 1/2 a baked potato with butter, S&P. Some grilled peppers and onions, a small piece of kielbasa, and some green beans I cooked in chicken broth, seasonings, and buffalo sauce.  YUM!  Then I went back for more. 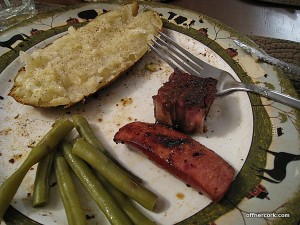 I didn’t even bother doing the dishes (not that there was much since most everything was grilled), I just plopped back down on the couch.  Scott poured us a glass of wine. 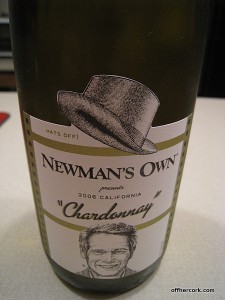 Scott was in charge of taking the wine pics because I was on the couch but he didn’t get any of our glasses!  :p  So here’s the bottle instead.

Newman’s Chardonnay and it was really good!  We watched more TV and I stayed up way too late.  I had another wee splash of wine and then finally called it a night at 1am.  Crazy!!