Warning: Parameter 2 to WPE\Site_Preview::the_posts() expected to be a reference, value given in /home/customer/www/foodembrace.com/public_html/wp-includes/class-wp-hook.php on line 303
 January 2nd, 2009: Breakfast | Food Embrace

Morning guys!  We watched the Pens game from Tuesday and it was horrible.  We also taped a game last night but I’m almost afraid to watch it.  By 9pm I was very tired and by 10pm I decided to head up to bed.  I read for 1/2 hour and then I called it quits.  Wow but I was tired!

I got up this morning at 7:30. Rocky wasn’t bugging but I decided to get up and get moving.  I’m actually kind of bummed today because our vacation is winding down.

I was debating a run this morning and decided to make breakfast while I thought about it.  I made oats! 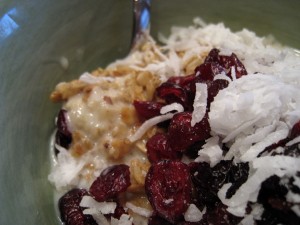 Once it cooked I added a little spiced rum at the end.  Because I was adding eggnog as a mix-in this morning!  Which is drizzled around the top.  There’s also a little banana nut bear naked, cranberries, and coconut sprinkled on top. 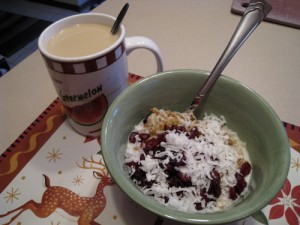 Holidays on an island breakfast

The coconut was added because it was coconut cream coffee this morning.  Everything was very yummy but I ended up not eating that whole bowl as I got very full.

I just realized I was so wrapped up in cleaning and organizing yesterday I forgot to make bread for dinner!  Doh!  We are having leftovers tonight, so I’m going to try and make bread today.

Still flip-flopping about a run, wondering if I should give my legs a rest.  Maybe do some yoga?  Everyone seems to really like Yogadownload.com so maybe I will take a look at that site.

Also saw an intriguing commercial for the crunchless abs DVDs.  Anyone hear of them?  The moves look very dancey and ballet-ish which appeals to me.  Thought about giving them a closer look.

Oh and I also got a new cooking magazine in the mail.  I will have to take a look at it and let you know what I think.