Warning: Parameter 2 to WPE\Site_Preview::the_posts() expected to be a reference, value given in /home/customer/www/foodembrace.com/public_html/wp-includes/class-wp-hook.php on line 303
 January 1st, 2009 | Food Embrace

I got up around 8ish and decided to just get up and get the day started.  I took Rocks out and it was brrrr chilly!  No snow though which is what the forecast has been saying.  Honestly though, I’m past the snow stage.  I like snow for Thanksgiving and Christmas.  Those have past so no snow now is not as big of a deal.

I came back in and had some breakfast.  I was going back and forth about running first or eating.  And then I thought I might take the day off running entirely so breakfast first it was. 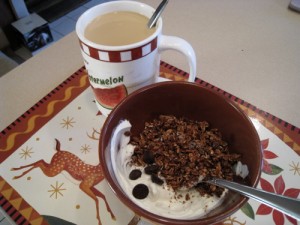 Scott told me last night he was making peppermint coffee for this morning.  I added a wee bit of peppermint extract to my creamer and also to some 2% Fage.  I topped the yogurt with some chocolate granola.  Everything was so good and perfectly pepperminty!

After I ate breakfast, I got moving in the kitchen.  I made the brine for the chops and got those situated in the fridge.  Then I made some muffins and pulled out some frozen fruit to thaw in a bowl.  I also pulled out some chicken breakfast sausage and had that heating up in the oven.  After all that was done I cleaned the kitchen up. 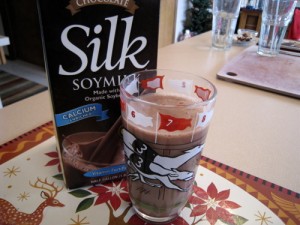 While the muffins were cooling, I decided to head out for my run.  My thoughts of taking the day off diminished.  I was still going to take it easy though and only do 2.5 miles.  I changed and turned the oven off since I was leaving the house and headed out for my first run of the year!

Good thing I was only going to do 2.5 miles because my left knee was a bit fatigued.  I’m not surprised, both Tuesday and Wednesday I ran longer distances for the first time which I’m sure affected my legs a bit.

By the time I got back home, Scott was up!  It was going on 11am, right before the Rose parade was to start.  I drank my CS and took Rocky out for a quick walk.  When I got back, I headed straight to the shower and Scott set the parade to tape.  After my shower we sat down to New Year’s brunch and the Rose Parade! 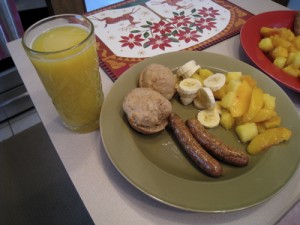 We had eggnog muffins, chicken breakfast sausage, and some fruit salad (pineapple, mango, peaches, and banana).  And mimosas because that’s how we roll on NY morning!  We had leftover champagne from last night and I wasn’t about to let it go to waste or throw it out.  Into some orange juice it went!  I ate everything on my plate.  One muffin had some butter and the other was plain.

The Rose Parade had some really amazing floats this year.  I love seeing what people have come up with for float ideas and what materials they used.  It totally blows my mind the colors and creativity of the floats.

After the parade (which was later for us since we taped it) we watched 2 new shows on HGTV.  And then decided to go upstairs and clean out the closets.  We did it not long ago but it needed done again.  We have so many things going into the give-away pile!  I love purging; it’s a nice feeling to clean things out and get the house more organized.

We still have more to do though but we started getting hungry.  While I was making dinner I munched on some raisins. 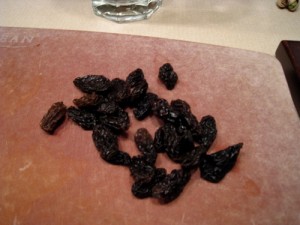 I was in the cranky hungry stage so I needed something to tide me over.  I had these and 1/2 a Brazil nut and 2 pistachios.  Then it was time to eat! 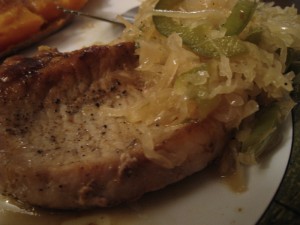 Where I come from it’s tradition to eat pork and sauerkraut on New Year’s Day so that’s what was on the menu!  I brined some nice thick cut butterflied chops.  I seared them up on both sides and then let them finish cooking in the oven.

The sauerkraut had onions, green peppers, and a bit of beer mixed in. 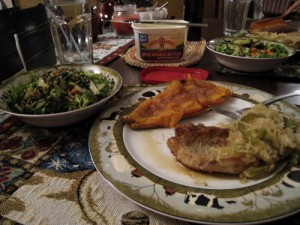 All together there was a side salad:

Dressed with some balsamic and oil.

Baked sweet potato with a bit of butter and cinnamon, and then 1/2 my chop with sauerkraut.  YUM!  So good!

Then we cleaned up the kitchen and now it’s time for me to get in my jammies.  See you tomorrow!