Hi guys!  Last night while Scott and I watched The Naked City we munched on these. 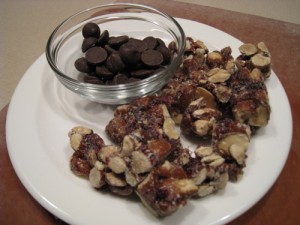 Along with 2 more wee glasses of wine.  I had some of the dark chocolate chips and four of the crack squares.  One thing I love about old movies is how very non-PC and dated the sayings and expressions are.  Today I doubt that a male coworker could get away with freely saying how a female coworker needs a good spanking.  It’s funny now but scary that that actually used to be the way of the world.

After the movie I went straight to bed.  I was wiped out.  Rocky decided he wanted to get up before 6am today and I told him he had to go back to bed.  I was sleeping in.  He did and I was able to sleep in till 7:30, wooo!

I checked the weather quick before taking him outside and saw that we are supposed to get more snow. Meh.  I’m done with snow guys.  And Rocky isn’t too pleased that he has to still wear his booties while out and about.  Perhaps I need to rethink this, “I need to have snow” business. 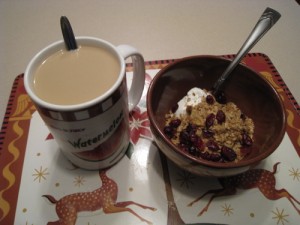 I had basic breakfast of 2% fage, bear naked banana nut, and some cranberries.  Coffee + creamer and boy howdy was that coffee strong this morning! :o  It didn’t turn my tummy to jumbles but it was pretty potent.

I got Scott up and started in on laundry.  Then I did some work stuff, blog stuff, and knocked some things off my to-do list.  Scott had a conference call today scheduled for noon which threw off lunch time.  I started getting munchie so I made a small snack. 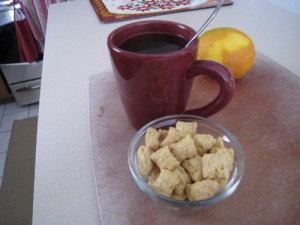 I had some tea sweetened with agave and some PB puffins.  I did not eat all those puffins though, just a few.  I took Rocky for his afternoon walk and when we got back at 12:30, there was still no call yet.  As much as it bummed me out not to eat with Scott, I couldn’t wait any longer and had to eat something.  I was starving by this point! 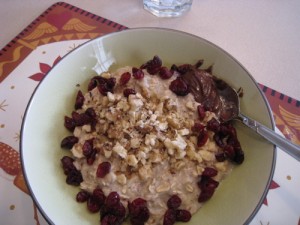 Since it was crazy chilly out and I was supa hungry, I decided on oats.  They smelled so awesome as they were cooking, just like banana nut bread, I went with that theme.  I added some ground flax to the oats.  And my mix-ins were crushed walnuts, cranberries, and some dark chocolate PB.  So good!  I made the usual amount which normally gets split.  I take 3/4 of it, and the remaining 1/4 goes to Scott.  I ate the whole dag-gum thing.  Told you, hungry!  I almost had an orange but gave my stomach a minute to catch up with my brain telling it that we are not hungry anymore.  That worked and no orange.

Still got lots to get done around here!  See you guys later!