Hi guys!  Sorry about not getting this post out last night, it got too late and I was too tired. :p

I only half cleaned the house, I dusted and swiffered and ran my washer through it’s clean cycle.  Then I took Rocky out for a mile walk and it was chilly!  I came back and was a little hungry so I decided to have afternoon tea! 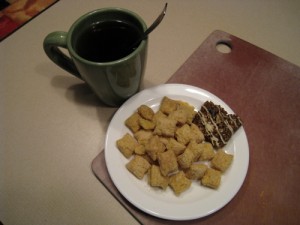 I made some peppermint tea and had the other 1/2 gingerbread clif and some PB puffins.  After that was over I was about to clean the house when Scott and I discussed the fact that we needed to get to Whole Foods for some stuff.  Cleaning got put on the backburner and we were out the door to WF.  We got back home around 7:30 and once everything was put away I started getting dinner together. 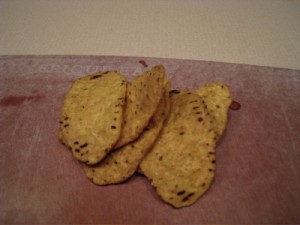 I snacked on these while I worked, sweet potato chips from FoodShouldTasteGood.  These are now my new go-to “chips” for when I want something salty and crunchy.  I couldn’t even tell you the last time I had actual chips it’s been so long.  I thought about getting some last night while we were out but decided against it.  I knew they wouldn’t get eaten as I’m just not into chips so much anymore.  Or anything like that really.  I used to eat Funyuns and Doritos and all that stuff.  Now I’m like, “Ew yuck”.  Which I guess is a good thing! 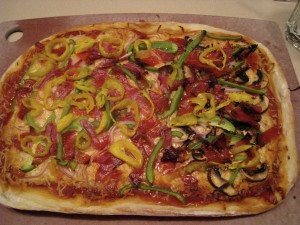 Last night saw the return of Pizza Thursday!  I did not make my own crust, since we were at WF, I just picked up some of their pizza dough.  It’s usually located where the prepared foods are and where they have their dips, hummus, and salsas.  It’s really tasty (sometimes they have WW dough out as well) and I feel good eating it since it came from WF.  Moving along!  I quick made a pizza sauce and topped it with a 6 cheese Italian blend.  Then there is: 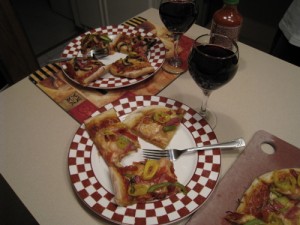 I had three slices and a gigantic glass of red that I did not pour.  Ahem.  By the time we actually sat down to eat and finish the Pens game from Monday (so behind!) it was going on 9pm.  :o  I ate my pizza and was very content.  I didn’t finish my wine, probably had 1/3 left when Scott topped me off.  Holy cow!  I didn’t finish that either, I only had a few sips of it.  By 10pm I was passing out but I made it through a little bit longer to get further along in the game from Wednesday night, which was started after Monday’s game was done.

As you can see we did not make it to MT.  I was doing okay and thought about going but then actually thinking about having to do all those pushups and so on, I knew I wouldn’t be able to handle it.  Next week!