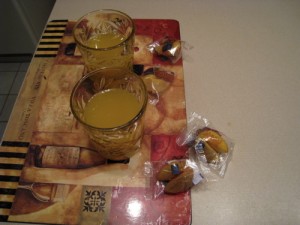 Hi guys! While we watched some TV yesterday, we each had two fortune cookies and a glass of Italian orange and mango soda. Yum! I was full but wanted something a little sweet and this hit the spot. It wasn’t long after that I headed up to bed to read. I read for about an hour and a half, by 10:30 I was out like a light. Oooo it felt so nice to sleep. :p

We got new phones yesterday, house phones. As much as I love cordless phones, we burn through them quickly. Maybe they are only made to last a few years but we do need new phones every 3 years or so. It took us a while to find phones because I was being picky. We have those phones where there is a base phone and then you can put satellite phones elsewhere in the house. The last set we had only had two phones. That meant no phone in the office and no phone in the bedroom. I can’t stand this! Also, they didn’t sync up with each other. If you had numbers stored on one phone, it was only on that phone, it didn’t transfer automatically to the other phones. Dumb. Plus you couldn’t turn off the ringers. They started dieing on us a few months back, only lasting for about 1/2 an hour before needing to be recharged.

Long story short (too late?), we found a set from Panasonic that came with 4 phones, they autosync with each other, you can turn the ringers off, and they have a headset jack for when Scott has to take business calls. Score! We ordered them from Amazon for a great price and they arrived last night. Wheee! Moving along… 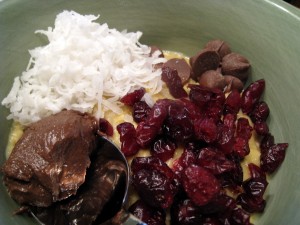 I was up and at ’em by 7am this morning. I had to get moving and get started on my day. I have so much to accomplish today! I went back and forth on what I should have for breakfast and finally decided on oats to power me through. I made a huge batch of them too so that I can have leftovers for tomorrow and not have to make a new batch. They were pumpkin oats ’cause tomorrow’s T-day! 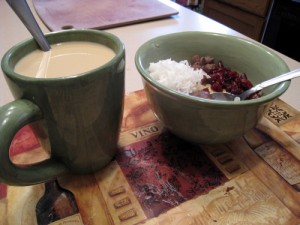 Had that with morning coffee which was good but a little on the weak side. Okay guys I need to bust on out of here and get a move on the day! So much to do, here’s the run down:

Whew! I’m off to get started!