Warning: Parameter 2 to WPE\Site_Preview::the_posts() expected to be a reference, value given in /home/customer/www/foodembrace.com/public_html/wp-includes/class-wp-hook.php on line 303
 October 23rd, 2008: Breakfast | Food Embrace

Hi guys! Last night my dinner seemed like it wasn’t holding me over. I felt full after I cleaned my plate but it wasn’t long afterwards that my stomach seemed empty and rumbling. I drank two big glasses of water thinking that was it, but that didn’t help. On my way out the door to SF, I ate a date and about 7 raisins. No pic because I literally was going out the door as I was eating them.

Once we got back home, I decided I needed a snack. 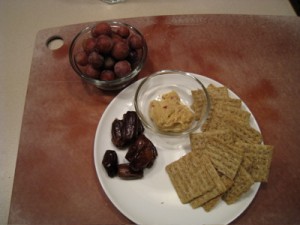 I wanted something with some chew to it, something I could focus on while I ate it so I would be more satisfied. The triscutis were calling my name so I plated some. Also on the plate, the last of the hummus (sniff!) which was maybe 1.5 TBSP worth, dates, and a small bowl of frozen grapes. I had one triscuit before the pic was taken. I ate all of the grapes, I don’t think Scott had any, about 5 triscuits + hummus, and two dates. I shared this with Scott as we watched some TV. The frozen grapes totally satisfied my chew craving. I’m going keep that in mind the next time I need some chew in a snack.

Both of us were freezing last night! During Rocky’s quick walk after SF class we were both really cold. And then we were cold while watching TV, we had to pull out the throw blanket for all of us to snuggle under! I turned the heat up before going up to bed. Ahhh, so nice crawling into bed now that it’s all toasty thanks to the e-blanket. It was definitely needed last night! 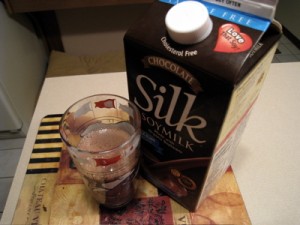 The alarm came early this morning. I just barely heard it go off! :o I got in some quick extra snuggles and then made myself get out of bed. I stumbled into the workout room and put on my running clothes, then took care of Rocky. It was chilly while I was outside during his potty run but it wasn’t so cold that I needed that extra layer just yet.

By 7am I was out the door for my run! It was slow going this morning. I was tired, my shins were a tad sore, and my ankle (the one that was bothering me yesterday?) seemed to get a bit fatigued. I made myself run though but I did a nice easy pace run. I did the full 2.0 miles. Almost cut it short but since I didn’t run yesterday, decided against that. I drank my CS and back out with Rocks. I put on the extra sweatshirt and it was needed! It was colder than I thought it was. My legs started getting cold as well.

Two things I need, a light extra layer to add on my run. I have a fleece but it’s not cold enough for that just yet. But I do think I need something a little more than my long sleeved workout shirt. And I need some sort of hoodie type jacket that is heavier than a regular hoodie and that I can zip way up so it covers my neck and chin if need be. Suggestions? 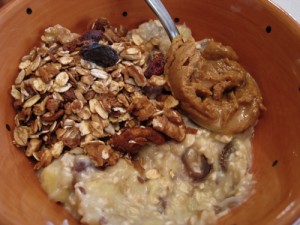 I did the now usual Wii Fit yoga routine as my stretches then it was time for some oats. I was starving this morning! Decided on a diff flavor of oats this morning.

Mix-ins were 1/4 C of homemade granola and a spoonful of PB. 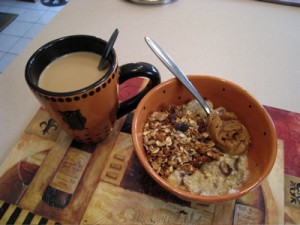 I liked the sweetness that the figs and dates gave the oats but did not care for the seeds of the figs. They were tiny and hard and resulted in a weird texture that I didn’t care for. It wasn’t the flax seeds because I checked when I felt something I didn’t like and it was a fig seed. I will do this again but omit the figs and leave the dates. I love dates! They are so sweet and chewy and awesome. They really worked out well in the oats.

Of course I had my morning coffee as well. I didn’t even drink a half cup today. It tasted off to me for some reason. I guess breakfast was a little unsatisfying for me this morning. :p

I’m having a heck of a week body-wise. Ever since I started running and adding in more fruits/veggies my PMS has gotten so much better! No bloaty-belly, no cravings, and the crabbiness has been cut way back. But this week? Ugh! Bloated and yucky, craving salt, and a bit on the crabby side. Plus two huge blemishes on my chin the likes of which I have never experienced. Good times! I can’t understand it. I’ve been thinking about it and the only two things I can come up with are: 1. The lack of fresh fruit. In the summer I was eating fresh fruit everyday. Now that the peaches, nectarines, cantaloupes and whatnot are gone, I’m eating more dried fruits, apples, pears and frozen fruits. 2. I’m not sweating as much when I run or workout. Yeah I sweat but since it’s not summer, I’m not pouring buckets. Thus not getting as many toxins out of my system. I hope the rest of the winter isn’t like this but I don’t care for it! /whine

Now I’m off to get dinner in the crockpot, no pizza tonight. We wanted something a little different!

And then I’m getting my hairs cut followed by lunch at WF. Wheee!