Warning: Parameter 2 to WPE\Site_Preview::the_posts() expected to be a reference, value given in /home/customer/www/foodembrace.com/public_html/wp-includes/class-wp-hook.php on line 303
 October 23rd, 2008: Lunch and Dinner | Food Embrace

Hi guys! Sorry this didn’t get posted until now! I had every intention of doing a lunch post but that got kiboshed. But let’s get the recap on!

Yesterday I got my hairs cut by my regular stylist! Hooray! She had foot surgery and had been off for 6 weeks. Then it was a wait to get in to see her because there are so many of us and we are all fighting over appointments! :p It was so nice to chat with her again and have her cut my hair.

I’m letting it grow just a bit and am going to try a short, almost like a bob, with lots of layers and flip and swish. We’ll see how that goes.

I had thought I was going to be late for my appointment because Scott was running late and needed to stop for gas.

But it turns out she was running behind as well so it all worked out.

After my appointment we ran over to WF to get some lunchie and just a few other odds and ends. No big shopping trip because we didn’t have the time. But I did finally find some Larabars! 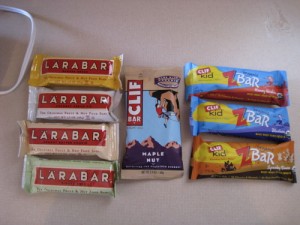 There’s coconut cream pie, ginger snap, peanut butter cookie, and banana bread. I also got a maple nut clif bar and spooky smores, blueberry, and honey graham Z bars. I wasn’t able to fit my camera in my new little purse I got from Eddie Bauer or I would have taken a picture of the energy bar aisle. It isn’t anything like the other pics of WF that I have seen and I’m bummed. It’s only about three sections and stuck in the corner of the store with all the supplements. In fact, it took me several trips to find it because they also have energy bars out in the grocery aisles as well. And I thought that was the regular spot, not thinking it would be split up. Yesterday as we were in the checkout line I decided to take a quick peak in the supplement section and there they were! Now I know where they are!

Because I couldn’t fit my camera I wasn’t able to snap a pic of my sample of the most decadent brioche I have ever had. It was white chocolate brioche and it was heavenly. So sweet with creamy bites of white chocolate. I believe there was a hint of orange in there as well. Oh my! My little slice was definitely enough; I wouldn’t be able to eat any more because it was so sweet (I’m more a savory snacker than a sweet one, don’t care for pies and cakes) but what a nice little treat. I don’t even like white chocolate but this was so yummy!

Lunch was from the salad bar area today. I was craving a mondo salad! I picked up small portions of some other prepared foods as well. 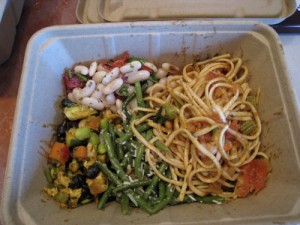 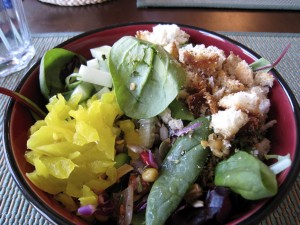 From the salad bar I got:

I portioned the salad bar stuff into a bowl and then added:

Topped that with a small amount of WF ranch dressing which is just okay. I had one bite of everything in Lunch Part 1 and then a few more of the shrimp noodle stuff.

I ate all my greens in the salad and was left with all of the toppings. So I added in some more greens. 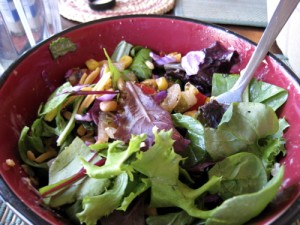 I ate about 1/2 of what I added in and then I was finally full. Mmmm I missed having a salad, felt like forever since I had one.

After lunch I cut up some pie pumpkins and set them in the oven to roast. I don’t think they turned out so well. It’s only supposed to take about 45 minutes till they become fork tender. Mine were in there for hours before I finally just shut the oven off because they were not getting fork tender. It was like they kept shriveling up and getting smaller and harder the longer they cooked. Weird? I’m going to have to take a look at them and see what I can do, if anything, with what I have.

We decided that MT class last night just wasn’t going to happen. We were both tired and had stuff to do, and our trip earlier in the day kept us out longer than we both originally expected.

I sat down to write a lunch post, it was about 5pm, and Scott came in wanting to do some Wii Fit. I was a tad hungry, so I munched before changing into workout clothes. 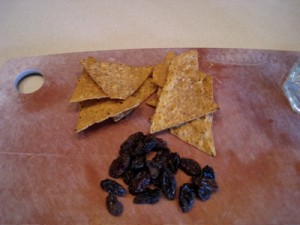 I had some FoodShouldTasteGood chips (three) and all the raisins pictured. Then I was ready for some Wii Fit. I didn’t do too much though. I was pooped and still a bit sore. Plus I already ran that morning! :p He continued working while I got dinner together. I was going to make some mashed potatoes but by this time I was tired and hungry, so I found a quicker solution. 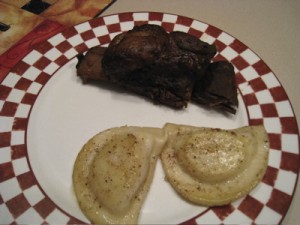 I had a short rib and two pierogies. Then because that rib was mostly fat, I pulled out another one. I only had about two bites of it though and I was finished. I had some horseradish cream sauce (homemade) on the side for dipping the beef into. No pic because all the ones I took with the sauce looked washed out and icky.

After dinner and cleanup it was time to finally relax on the couch. We recorded the Pens game and and watched another show while that was taping. Then we started the game, this way we were able to fast forward through the commercials and intermissions. 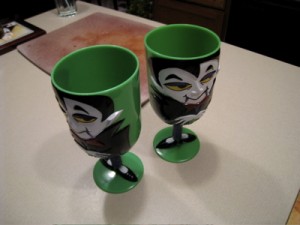 While watching the game I had two small glass of white (4oz). This is a Target wine and I’m just not into it anymore. It doesn’t taste like anything and I almost feel like I’m wasting calories by drinking something that is only meh. I also snacked on mini eggs. 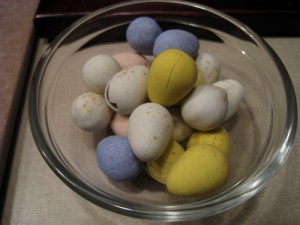 I had four mini eggs while I watched the game. Pens won and if we forget the first period ever happened, it was a good game. :p

After that I went up to bed, late again. This week was just not my week for early bedtimes!