Warning: Parameter 2 to WPE\Site_Preview::the_posts() expected to be a reference, value given in /home/customer/www/foodembrace.com/public_html/wp-includes/class-wp-hook.php on line 303
 October 18th, 2008: Breakfast | Food Embrace

Morning! We finished the movie last night, which was okay. It seemed like a typical 80s movie though. Dweeby kid gets picked on by the tough guys. He finds a mentor while having an adventure along the way. Cut to two training montages. Love interest that he can only pine after. Big fight scene at the end where he can show off his new skills. Happy ending for all! However the martial arts scenes were very good and the best that I’ve seen in a while. I would watch it again but it is a bit cheezey. 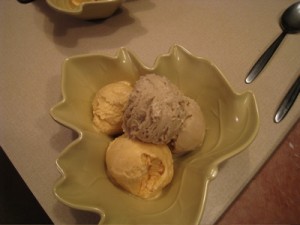 After the movie we got caught up on The Ultimate Fighter while munching on some ice cream. That show has so much drama it’s unbelievable. I can’t see how grown dudes can act like complete fools and think it’s not a problem. However that’s what the UFC pres wants because the more drama the more people will watch and the more money he makes. Meh. I went to be around 11ish I think, I can’t remember. :p

Rocky let me sleep till about 7:30 this morning but I stayed in bed till 8am. I didn’t have to be up so I wasn’t getting up! I think the chilly weather is here to stay. It was cool when I went to bed last night, I had to start off with my socks on to help warm me up! We had the heat on the whole day yesterday which was a first. It’s pretty low, just enough to keep the chill off as long as your dressed properly (no more shorts and tanks). When I woke up this morning and took Rocky out it was pretty cool out. Time to break out the flannels and winter jammies! I need to find more xmas jammies. I ended up getting rid of my xmas jammie pants because they were all too short. I should look online to find more.

I had my morning coffee first because I wasn’t quite hungry yet. And because I was still groggy and waking up, I forgot to take a pic! That’s just as well because I only had about 1/4 cup of it. I just wasn’t feeling the coffee this morning. I think I’m going to cut back on my amount anyway. I know I only have 1 mug in the mornings, but typically I don’t even drink the whole thing. What a waste! So I think I’m going to start filling my mug half way and if I finish that and feel like more, I’ll have some.

Breakfast was new! I got a new cereal while we were out yesterday. PB Puffins! Wooo! You all know how much I love PB, so I wanted to try these. 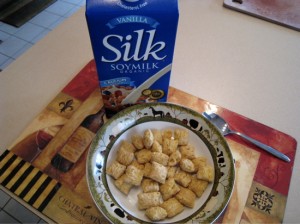 First of all these Puffins are huge! I thought they were going to be small little squares, but they are pretty sizable. And they are awesome! This is probably my favorite new cereal. Such great PB flavor and so crunchy. I put in about 1/2 c of soymilk after the pic. I think I will probably stick to snacking on these dry and not as cereal with soymilk. Being put in the soymilk they seemed to lose most of their PB flavor which I cannot have. So next time, I’m going the straight up munchie route.

Unfortunately they didn’t fill me up, even though I had a cup of them. 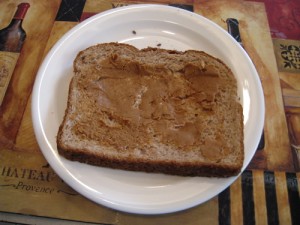 Keeping with the PB theme, I toasted up a slice of Omega 3 bread and put about 1/2 a TBSP of PB on it. I only left about a 1/4 of it as the rest filled me right up! Now I’m off to get ready for MT and our big day! As much as I would love to do nothing today, we need to go out and run some major errands. By major, I mean we need to hit so many stores. I hate running errands but it needs to be done. Hopefully we get a lot accomplished today! See you later