Hi guys! I put the movie on pause so I could get this post up! After breakfast this morning I cleaned the house which took me a bit of time. Then I heated up lunch because I was starving and Scott was about to have a conference call. I wanted him to eat before going into the meeting. 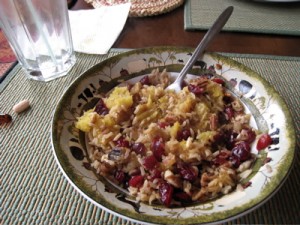 Scott had leftover pizza and I had the remainder of the stuffed acorn squash. It was a quarter of the squash with the stuffing. I took off the skin and smooshed everything up. I thought I might need an apple or something else, but this was actually quite filling on it’s own for lunch.

After lunch I showered and then tried to get dinner started. As I was pulling things out for prep I realized I was missing two ingredients! Grrr! And they were key ingredients, without them I couldn’t make the meal. Well I could but it wouldn’t have been what I was going for. This is why I try and keep my pantry fully stocked so that when I want to make something I have all the ingredients. CHD got interrupted for a bit with a quick trip to the store. I ended up buying more than I went in there for (of course!) but they are all yummy healthy things so I’m not too upset about it.

Once home with everything put away it was time to get started on dinner! 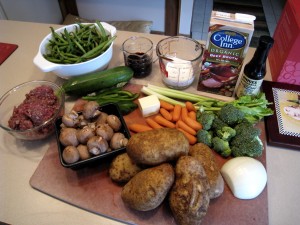 Some of the stars

While it’s not everything, it is the majority of what was used to create tonight’s dinner. Which was…. 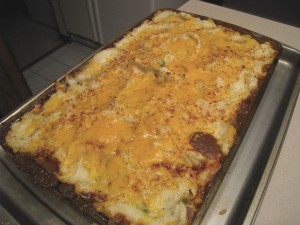 Shepherd’s pie! Everywhere I turn people are making Shepherd’s pie and that got me craving it in a huge way. We haven’t had Shepherd’s pie in ages! I couldn’t even tell you the last time I made it, but I believe it was years ago. So I decided to make some today, it’s a nice comfort food type meal. 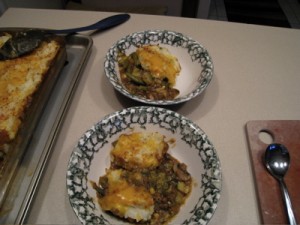 I loaded it up with veggies and it was so yummy. I was going to add beans to it but decided it had enough bulk on its own already. My bowl is the one in front. I had that, which was a small scoop broken in two. Then I had another super wee scoop because I was still a tad bit hungry. The ingredients I had to go out for today were beef stock and half&half. I plan on making it a recipe post so you’ll get to find out all the goodies about it then.

Two things that didn’t feel like being photographed today, while making dinner I snacked on one date and one dried fig. I also had a glass of cranberry juice and limeade mix. Mmm! While we ate, we started watching The Forbidden Kingdom. Paused it quick for cleanup and doing the post. Now it’s back to the movie. I’m already in my jammies! See you tomorrow!