Oh morning came way too early! I so wasn’t ready to get up and moving when the alarm went off at 6:30am. After snuggling for about 5 minutes I forced myself out of bed and downstairs. 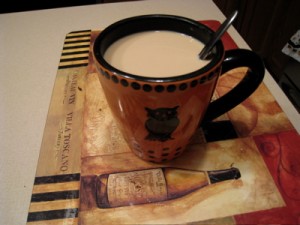 Sometimes when I get up early and haven’t had much sleep, I don’t really want anything to do with drink or food. I had my coffee but it was only about 1/2 the mug. It wasn’t sitting right in my stomach and wasn’t going down well. After checking mail and getting Rocky taken care of, I made some breakfast. 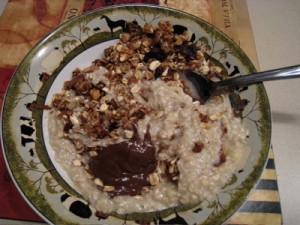 I made some oats because I needed something that was going to last me a while and see my through the first half of training. I started mixing it up before I remembered I needed to take a pic! It was basic oats with 1/3 cup of homemade granola and a spoonful of dark chocolate PB.

We headed over to the gym and training began! The first half was single stick stuff. This means I have a stick and my training partner has a stick and we do drills, takedowns, chokes, and locks. The first half was 3 hours long and then we broke for lunch. We went to Subway and I don’t have any pics. I was out with a whole bunch of SF guys (I was the only girl training) and I don’t think they would have understood the need to take a picture of my food. :p So try to picture it, I had a 6inch turkey on wheat with provolone, lettuce, toms, green peppers, banana peppers, and some mayo. My sandwich was so icky. I wasn’t in the mood for Subway and am starting to move away from that place as an option for eating. Scott didn’t like his sandwich either. I also had a banana and a couple sips of Sprite Zero with my sandwich. There was no option to have water and there was no option to have a healthy option for a side instead of baked chips. I didn’t eat the chips, waited till I got back to the gym and ate the banana I brought. I had Sprite Zero by accident. I meant to get regular Sprite but poured the wrong one. It wasn’t bad but I don’t care for fake sweeteners in drinks so I try to avoid them.

The second half of training was double stick, empty hand stuff, and empty hand verses stick. At about 3pm I started crashing hard. My brain was turning to mush and I was so tired. We only went to 4:00 thankfully because I know I wouldn’t have been able to last any longer. One of the guys who came in to train had taken some action shots, so I’m going to ask him if he can pass some along. Here’s our “fighting stance” pic with the trainer who was in this weekend. 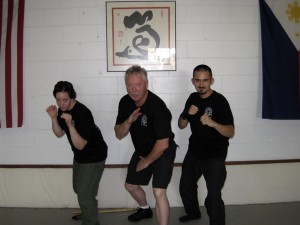 That’s me, the instructor and Scott. Our uniforms are school t-shirts and BDU pants. The guy who came in is a huge name in the martial arts world, has a shit ton of experience, trained Special Forces for several years and has recently been asked back by the military to train the troops. If you’re super interested in who he is, ask and I’ll tell you. 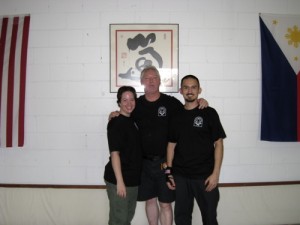 Remember I had been training for a long time at this point so if I’m looking a little rough, that’s why. :p

I think we got home around 5ish. Rocky was beyond excited because we had been gone all day long! 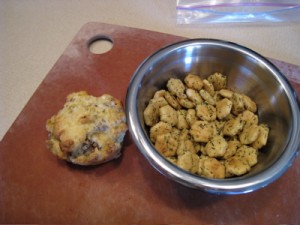 Before hitting the shower I had a couple bites of the breakfast muffins I made, and about 6 of those dilly crackers. I ran up and showered and then fed Rocks and got him outside. We had some leftover Mexican so I heated that stuff up. 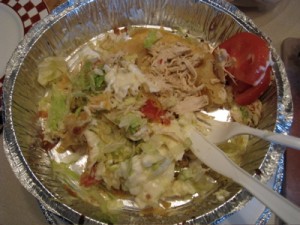 This is a chicken tostada, sorry that it looks like a mess. That’s from having to separate my portion from Scott’s. I had about 1/3 of that? I just didn’t want it. I felt like I was eating crap and I was craving veggies like crazy. I didn’t get much yesterday or so far today and my body was feeling it. 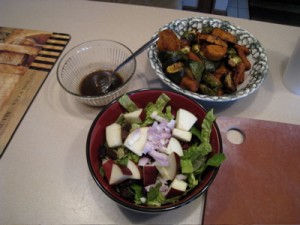 I quickly made myself a salad with romaine, apple, red onion, raisins, cranberries, pumpkin seeds, and sunflower seeds. Drizzled some balsamic over it and ate most of that. The veggies in the background I had heated up but didn’t eat. After dinner we took Rocky for a longish walk. Once back it was time to blog and get caught up! 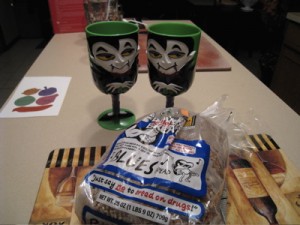 Scott and I are having a wee glass of red in our halloween glasses! And I had a surprise today! I got my prize for blogger secret ingredient. Hooray!

Thanks Andrea and Erin! And I must tell you all that Andrea has the cutest address labels I have ever seen. Oh they are so sweet.

And this is one hefty loaf of bread, I picked it up and was amazed at how dense it felt. I plan on toasting some up for breakfast tomorrow.

And that guys was my day. I know it was a bit rushed but I felt so behind that I needed to get caught up. Now I’m going to get some jammies on and hang out with my two favorite boys. See you tomorrow!