Hey guys! Well our day was a lazy one which is what Sundays are all about, right? I did some posts and worked on the site a bit then Scott and I started a new game, MetalGear IV. It’s just okay. I wish there was a little more action and there is way too much talky talky in the animation scenes. I was getting frustrated in the beginning because the only weapon I had was this huge knife that also shocks people like a taser when you use it. However all I could do was knock enemies unconscious instead of being able to dispose of them. Not very much fun. I’ll play it out and kick the game but doubtful if I’ll play it again. During game time I was also doing laundry (I originally typed that as playing laundry. I don’t like laundry enough to want to play it as well! :p ). I used to do it all on Sundays but now I split it up between Sunday and Monday. And I realize you probably don’t care about my laundry habits but I’m sharing anyway.

We eventually got hungry and I decided to just go ahead and roast the turkey breast. I’ve had it for a while and it needed to get used. 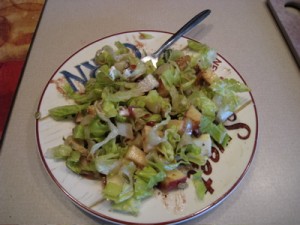 Since it was going to take a bit for the turkey to roast, I made us some quick starter salads for to snack on. I didn’t have much veggies today so this was a way of filling that void. The salad is going to be a future recipe, so you’ll find out what’s in it then.

I will tell you I was very pleased with this experiment because the salad turned out awesome!

We played with Rocky for a bit and I looked through my Rachael Ray mag a little while dinner was cooking. Yes I know a lot of people find her annoying and I do too sometimes when watching her. But I think she has some good ideas and I really like her magazine. I finally ordered a subscription and my first issue came in last week. This is the first chance I got to actually flip through it a bit. I’m only halfway through but I did see some interesting recipes that I might have to put my own spin on. 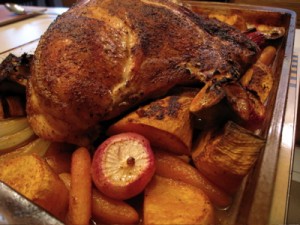 Finally dinner was ready! I always try and stick a ton of veggies in the roasting pan with the meat. Easy way to get side dishes and only dirty one pan. 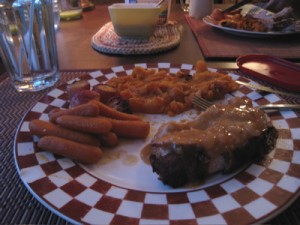 Sorry if the pic is a little dark. It was dark out and I need to put a brighter light on the table. On my plate is one slice of the breast topped with some quick gravy I made. On the side is some mashed sweet potato with a little butter, carrots, and radishes. I ate everything on that plate only leaving three wee radishes. It was yummy!!

After dinner and clean up it was time to chill on the couch for just a bit before it was time for me to head to bed. 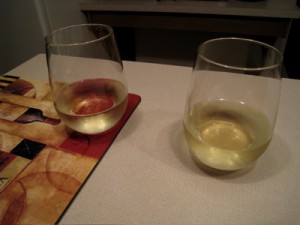 We had one glass of white while watching Ultimate Fighter. The new season just started (it’s like AI, a new season starts like every three months) and so far there is already drama. Hopefully this season everyone will act mature and like adults. Last season those guys were such buttheads.

After the show it was time for me to hit the hay and that’s exactly what I did. I was in bed before 11pm, go me!