Warning: Parameter 2 to WPE\Site_Preview::the_posts() expected to be a reference, value given in /home/customer/www/foodembrace.com/public_html/wp-includes/class-wp-hook.php on line 303
 September 21st, 2008: Morning | Food Embrace

Hi guys! When we left off last night, I was undecided what to do about a snack. I ended up not making fries. I wasn’t super hungry and didn’t want to spoil possible fry experience. 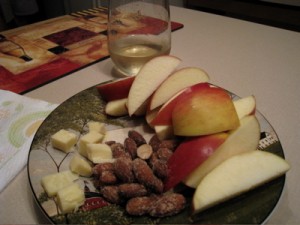 I opted for more healthier things. YaY me! I sliced up a gala apple, put out some smoked almonds, and some cubes of cheddar. I split this plate with Scott. Oh and a glass of white there in the back. I ate most of the apple, three cubes of cheese, and a small handful of the almonds. Copycat was on last night, so we munched on these while watching the movie. Then I had another small glass of white. After the movie was over at 11, I called it a night and went to bed.

Rocky was not having any sleeping-in this morning. He was up before 7am.

I squeezed an extra 1/2 hour out of him and then got up. Since I didn’t get up in the night to turn the ceiling fan down I knew right away it wasn’t going to be as cool outside. And I was right. It was still a nice morning but definitely not as cool as it has been. I could have used my bandanna on my run this morning but silly me, I didn’t take it. 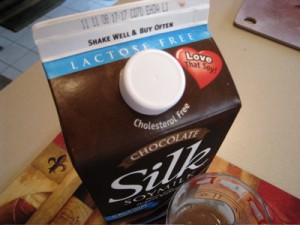 Hooray for early Sunday mornings. I only came across two bikers on my run today so it was really quiet out. It was a little rough going on my run, my shins were feeling really tight and not wanting to cooperate at all. I did the full 1.6 miles but took it slow. I kept my HR up in the 160s and finally got the total calories burned to go up a bit! YaY! After chugging the chocolate Silk I was out the door. I was going to take Rocky for a longer walk this morning but he was not into it, so I just did the normal routine. I actually was glad because by the time we got back home it was already after 9am! The morning was running away from me.

Since I still hadn’t made any granola, I used the bare naked granola for my first breakfast. 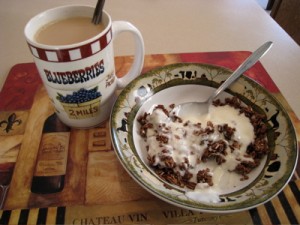 I had about 1/2 a cup mixed in with four scoops of yogurt. The granola turned the yogurt to a chocolate brown color. :p I had that along side my morning coffee with pumpkin creamer (whee!). It was a very nice light breakfast that filled me up perfectly.

After a little while Scott got up and I got moving on making Sunday breakfast. 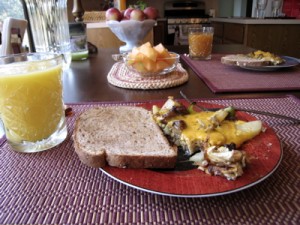 I used some of the leftover steak and potatoes from Friday night and made a quick frittata. I had a slice of that along with a piece of 12 grain bread toasted with a smidge of butter and some cantaloupe on the side with OJ to wash it down. I went back in and had another 1/4 piece of the frittata because it was so good and I was still hungry.

I had grand plans of possibly roasting a turkey breast for Sunday Supper but it’s really hot out and the thought of heating up my kitchen that much doesn’t sound very appealing. Now it’s time for me to do laundry and some other chores around the house. See you later!