Hey guys! Yesterday was just a bad bad day. I wasn’t feeling well because of my headache and it was the end of a very long week for me. All I wanted to do yesterday was nothing!

I still wasn’t feeling well by the time lunch rolled around. I wanted something comforting so I made a go-to soup. 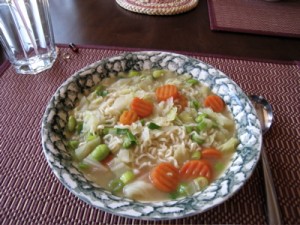 I sometimes make a quickie Asian-ish style soup with raman noodles. No flavor packets though, ewww too much salt! I throw in whatever veggies I happen to have on hand. Sometimes I add a few shrimp as well. Not yesterday though. This has chicken broth, some soy sauce, chopped cabbage, carrots, edamame, and green onion, plus seasonings like salt, pepper, garlic powder. It normally hits the spot but yesterday I barely ate any of it. I mostly just sipped at the broth. I just wasn’t feeling well enough to eat it.

It was around 3pm when I decided to try taking a nice hot bath to see if that would help. I added some epsom salts to help my hamstring. It was feeling loads better and I was glad I took take the day off and didn’t run. The bath did help some and I was really hungry by the time I came back downstairs. 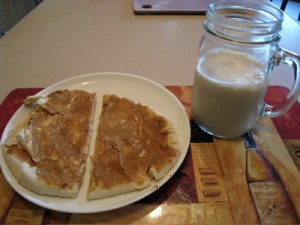 Not the best pic..

I needed more comfort food, so I toasted a pita and topped it with all natural PB and some honey. Mmmm! I had a glass of vanilla Silk with it. We ended up not going to MT last night. I was tired and still felt a little on the icky side. Scott eventually came wondering in the kitchen looking for food :p So I got dinner started. All over the internets I have been seeing folks eating buffalo chicken pizza. Hrm, that sounds interesting and last night I decided to give it a try. I need to work out a few kinks but I think it turned out well for being on the fly. 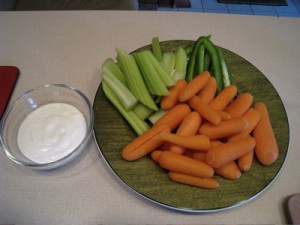 Of course you can’t have buffalo chicken without some carrots and celery on the side right? Plus a few green peppers that didn’t fit on the pizza and some ranch dressing for dipping. This actually turned out to be an awesome side dish to pizza! I think from now on when we have pizza, I’m going to chop up some veggies to eat with it. 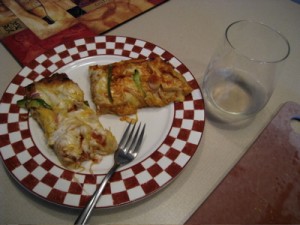 On half of the pizza I put extra buffalo sauce on top. I wasn’t sure if it was going to make the pizza too hot so I didn’t want to risk doing that to the entire pie. I had one piece with the sauce and one piece without, plus a glass of pinot. The side with the sauce was awesome and not too spicy at all. I will have to add it to the other slices when we have leftovers. On top of the pizza is of course the chicken, red onion, green pepper, and a little bit of cheddar cheese to give it some upmh. While watching TV I had two more glasses of pinot.

I have realized that I need to stop having wine with my meal. I drink it too fast and don’t really enjoy the fact that I’m having a glass of wine. Then I end up having more because it’s like the first glass went unnoticed. I would rather be sitting on the couch sipping the wine and enjoying it that way. From now on, I’m going to have water with dinner and save the wine for later. 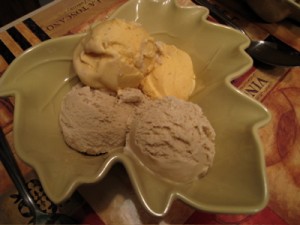 Before bed was a little snack of pumpkin latte! Two wee scoops of all natural coffee ice cream plus two wee scoops of pumpkin ice cream. We ate this while watching House Hunters. Sometimes we get so frustrated with the people on that show! There are couples who say they don’t want this and that and this other thing, then end up picking the house that has all the stuff they don’t want. Last night was one of those couples. Scott and I have developed a drinking game for this show (although we have never practiced it!), I should post it some day. I’ll give you a taste though, one of the rules is you have to drink any time there is mention of the man needing “a man’s cave” or “a man’s domain” or something related to needing the “man’s room”. I started the second episode of HH and then decided that I just needed to go to bed. Which is what I did!