Morning guys! I know it’s late in the am for my post. Let’s start with last night.

We were actually at stick fighting late. Boo. I didn’t get home till after 10pm and since my bedtime is 10:30 I was super tired. I was also hungry and thirsty. This is the downside to our classes running later in the evening, I come home late and am hungry. 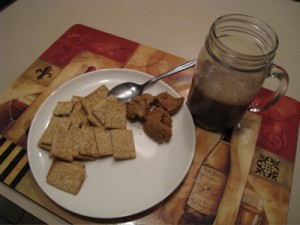 I had a glass of chocolate Silk and some Kashi crackers with PB. I have no idea how many I ate but Scott ate some as well. I was still thirsty but I didn’t want to drink a whole bunch before bed otherwise I would be getting up every half hour to use the bathroom. We watched a quick show while snacking and then I went straight to bed.

No run for me this morning. My leg was bothering me yesterday. My hamstring on the upper part of my leg felt funny. Like it got slightly tweaked some how. The later it got in the day the more it started to ache. By the time I was heading to bed it ached nonstop. So I decided to take today off from running, get some extra sleep (or hope to!) and see how it feels.

I slept until 9am this morning.

That doesn’t happen anymore. Since I typically get up early, Rocky gets up early everyday. On Saturdays and Sundays it’s usually about 8am when we get up, that’s about how long he’ll allow for sleeping in. I was so surprised this morning to see it was 9am! 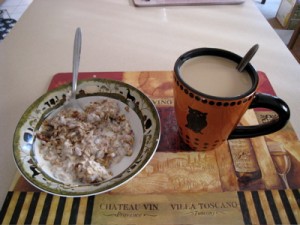 Since it was a late morning, I only made a light breakfast. Usual coffee + creamer and a bowl of 1/2 granola with 4 spoonfuls of yogurt. I have also been sucking down the water and took two ibuprofen. I woke up with a wicked headache. It hurts and it’s the kind where if I move my head too fast I feel light headed and dizzy. Good times. I’m waiting for it to subside so I can paint some other things and do the weekly house cleaning.

It’s Thursday and that means the weekend has arrived at OHC. I am so glad. This week wasn’t the greatest and I’m just happy to have it in the past. Tonight is pizza! I’m trying something new and I hope it turns out. I think I might Thursdays pizza nite at OHC.