It’s a fresh start to a new week!  Last week was much better than the previous one, the only time we dined out was on Sunday while we were in Boulder.

I don’t have pictures of that food because it was nothing special.  Next time I’m in Boulder, I’m hitting up the fancier farm to table joints! Lesson learned, don’t waste time at brew pubs because they don’t have any good food to offer.

There was a lot of leftovers this past week and utilizing what I had in the fridge and pantry.

This week I’m planning on spending more time in the kitchen.  I have a checklist of items that I want to get made (like stock) and I really need a kitchen day.  I haven’t had a chance to spend any significant time in the kitchen lately and it’s stressing me out.

We were busy all weekend so I also didn’t get a chance to prep for this week.  I feel a little bit behind but I think that I can catch up easily! 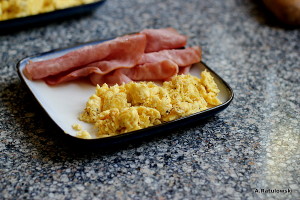 Scrambled eggs and two slices of ham.  The ham is applegate farms and I heated it up in a skillet first then made the scrambled eggs. 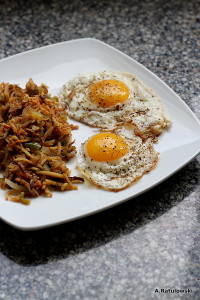 Sweet potato hash with fried eggs.  One large sweet potato, shredded, with chopped peppers and onion.  Cooked in a skillet in a little lard until everything was cooked through.  Seasoned with salt, pepper, and garlic powder. 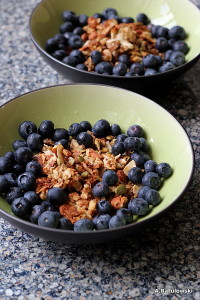 Fresh grain free granola with fresh blueberries.  I splashed on a little vanilla almond milk after the photo was taken.  I’m playing around with the recipe for the granola and using eggs in the mix as a binder so that the granola clumps up a little more.  So far it’s working but I’m still tweaking with the recipe. 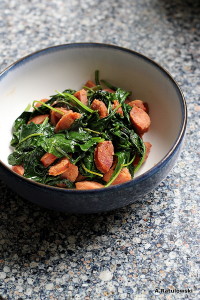 Sauteed baby kale with andouille sausage.  I used a whole package of andouille (4 links), sliced and cooked in a skillet in a little lard.  Then added in a whole 1/2 pound container of baby kale, and let that wilt and cook down.

I seasoned it with new Flavor God seasonings.  These season blends are legit!  They are handmade fresh when ordered and taste fantastic.  They are 5oz containers and for freshly made seasonings the price is spot on.  (not affiliate links).  For this dish I used the Spicy Everything Seasoning. 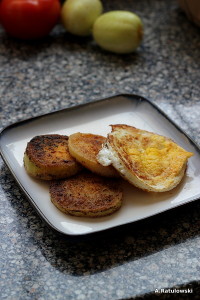 I spotted some green tomatoes at the farmer’s market this past week and immediately knew what I would be having for breakfast.  Fried green tomatoes along with a fried egg.

The tomatoes were fried in lard and I used a blend of tapioca starch and coconut flour for the coating.  Also seasoned with Flavor God’s Spicy Everything blend. 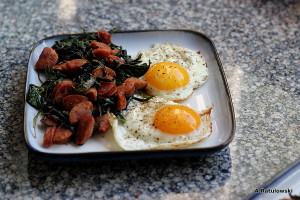 Fried eggs with leftover kale and sausage.  This breakfast was perfect fuel to deal with the crowds in Boulder! 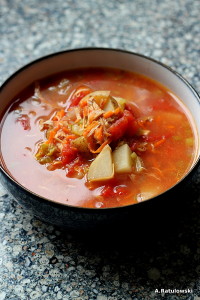 Leftover soup that I added some diced tomatoes to for a little flavor boost.  We also had the last remaining portions for lunch one day as well.  I didn’t want to toss the last little bit and it was past the time of being able to freeze it for later.  It definitely was on it’s last leg but made for a nice quick lunch. 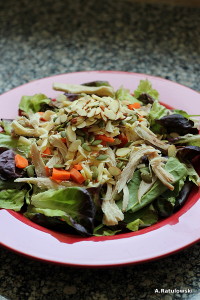 Mixed greens salad topped with leftover chicken.  This salad was huge and so filling!  I love having gigantic salads for meals. 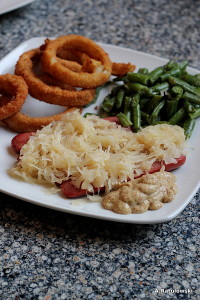 Grass fed hotdogs (Applegate Farms) topped with kraut, a side of green beans, and some onion rings.  The onion rings were premade and about as clean as you’re going to get for packaged food.  The hotdogs were amazing!  Not normally much of a hot dog fan but these really hit the spot. 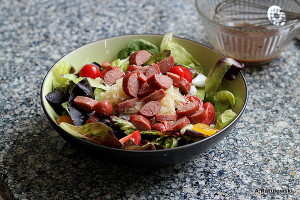 The next day I had the leftovers on a salad!  A little kraut, tomatoes, and I made a spicy brown mustard dressing to go on top.  It was perfect and now I think this should be on a menu somewhere.  Seriously, people would buy the hell out of a hot dog salad to go with their beer! 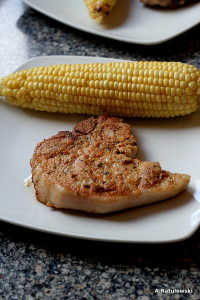 Looks boring but tasted delicious!  A pork chop seasoned with Flavor God’s Garlic Lovers (look I just got the seasonings last week but expect to see more of it because they are delicious) and cooked in a little lard in a cast iron skillet.  Along with fresh corn on the cob with a little grass-fed butter. 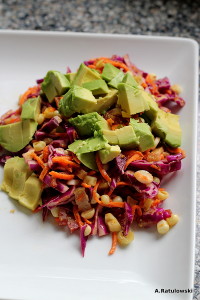 We were out of salad stuff and I had no desire to run to the grocery store close to the weekend.  So I looked in the fridge and saw there was some cabbage that needed used up.  I made a quick slaw with purple cabbage, shredded carrot, corn cut off the cob, and some bacon.  A dijon dressing on top and I added some avocado as well.

So good that I’m definitely making the slaw again this week! 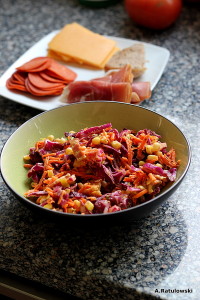 Leftover slaw with some Applegate Farm’s pepperoni and prosciutto on the side along with a little sharp cheddar cheese.

I totally inhaled that slaw too!

Since we have been eating better for several weeks now my body has caught up with the new routine.  I’ve been hungry in the afternoons for a little lunch so I’ll be adding in lunch to the Monday Meals post.

All pork, chicken, and eggs from Jodar Farms.

Some veggies from the farmer’s market.

The goal is to not eat out at all this week and looking at our schedule for the upcoming week this should be an achievable goal.

I feel like the Monday Meals posts are getting a tad long so I might break it up into smaller posts through out the week.  I’m still toying around with that idea.  Also please let me know if there are any topics you’d like me to cover!  Pantry staples or grocery shopping tips for example.  I’ll be sure to make a post on it and let you know when it’s up!

Have a great week everyone and get those meal plans together!