This will be the last “Monday Meals” but don’t worry, I’ll still be sharing all of our eats with you!  Monday through Thursday will be a recap of meals and exercise for that day.  Those posts will go up at the end of the day. Fridays will be rotating topics that include recipes and the weekend will be time off for play!

I really want to get this blog back to it’s roots, which is about living a healthy and active lifestyle by focusing on real whole foods and doing things we love.

Plus these Monday posts were just getting way too long and can’t contain all of the deliciousness!

New schedule starts tomorrow so look for that post at the end of the day. 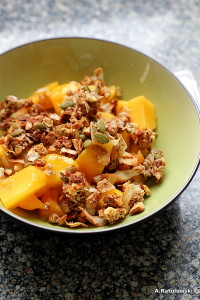 PEACHES!  They have finally started showing up at the farmer’s markets and I am stoked!  Colorado peaches are amazing and their season is very short.  If you see them, grab them while you can!

Peaches with a little sprinkle of grain free granola.  This breakfast rocked, it was sweet from the peaches and the granola helped keep me full for several hours. 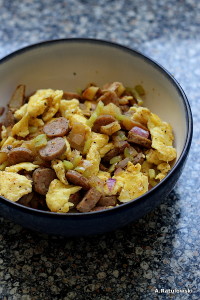 This was a second breakfast.  I had a big bowl of peaches one morning (with no granola) but once we got back from our big walk with the dogs, I was starving!  So I made a potato-less hash.  Scrambled eggs, sliced up chicken sausage, and peppers and onions.  Totally hit the spot! 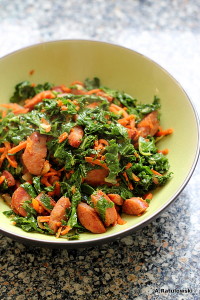 A huge bowl of sauteed kale with kielbasa and shredded carrots.  Cooked up in some ghee and seasoned with Flavor God’s Spicy Everything blend.

Protein + greens are a favorite next to soup! 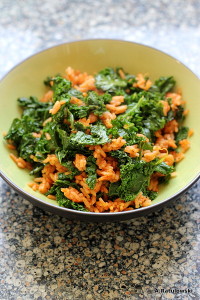 Leftover rice that I cooked up in some lard with a little tomato paste and seasoned with chili powder.  Then I added in some kale and cooked everything until the kale wilted down and cooked through.

Not as hardy as sausage but still very satisfying and would make a great post workout breakfast. 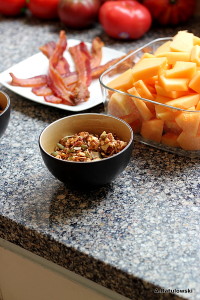 Poor man’s breakfast this past weekend.  We ran out of eggs!  It was tragic.  So this was some bacon, sliced cantaloupe, and granola.  Some almond milk got splashed on the granola as well.  It was good but would have been better with eggs! 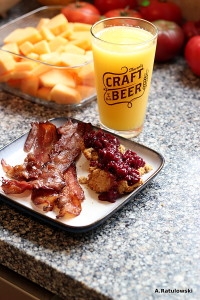 More bacon and cantaloupe!  The bacon was from a local butcher that they cure and smoke in-house.  Grain free scones topped with cherry jelly.  I pitted the cherries and added them to a blender with cup of water.  I blended for a minute until the cherries broke down a little.  A little bit of sugar was added to the mixture.  In a sauce pan the mixture simmered until it reduced by half.  Once it cools it thickens up a little bit and now you’ve got a quick jelly.

And a fauxmosa to wash everything down.  OJ + Seltzer = fauxmosa  Tasty!  Plus you can add fresh lime juice or mango juice to give it a little extra kick. 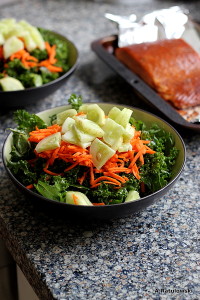 Kale salad with cucumbers and carrot.  A quick balsamic dressing on top.  Allow the dressing to mix with the kale a few minutes before serving.  Helps to break down the kale and pull out some of the bitterness.  Smoked salmon on the side! 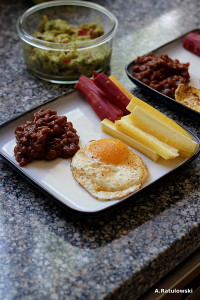 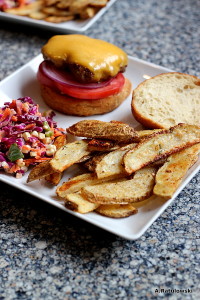 Cheeseburger on a gluten-free bun, coleslaw, and oven fries.  I nixed the bun, I didn’t like it. It had a weird texture to it and was spongy.  Ew.  So I ate my burger bunless which I prefer! 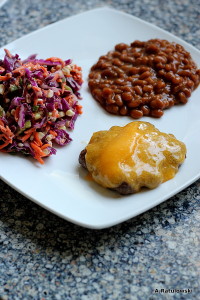 Burgers take two! Leftovers with the addition of baked beans.  Both Scott and I can handle beans without it causing any distress on our digestive system (to be blunt, beans don’t give us gas) so we eat them from time to time. 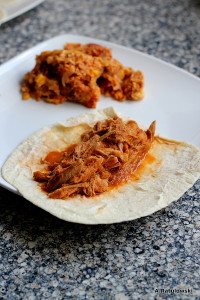 A really monotone and unappealing picture, I know!  Pulled pork tacos with a cauliflower veggie mix.  The pork butt was cooked in a slow cooker with a can of diced tomatoes, 1/2C water, with sliced green pepper and onion.  Once the pork was done, I pulled it out and shredded the meat.  I blended all of the liquid and veggies together to create the sauce. Everything was seasoned with salt and chili powder.

Served on a white flour tortilla that I ended up not eating.  It was making me feel too full too quickly, so I tossed it and ate the pork with some guacamole.

The veggie casserole was a head of cauliflower pulsed in a food processor until it resembled rice.  I sauteed that in a huge skillet with onions, peppers, carrot and corn.  Once everything was cooked, I added two eggs to the mixture and some shredded cheddar.  Everything was seasoned with chili powder and then I cooked it all again in a casserole dish till it was bubbly.

It looked like a mess but it was tasty!  We had this two nights in a row. 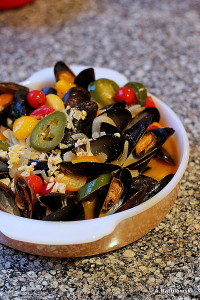 Second favorite meal of the week, mussels!  I purchased these at my local Whole Foods.  With a ton of butter (seriously, like 6 tablespoons), I sauteed up some onion, jalapeno, and lots of garlic.  That all got seasoned with Lemon Garlic Lovers Flavor God seasoning.  Then I added the mussels and a bottle of wheat beer.  Put a lid on it and let that simmer until the mussels opened.  Maybe 5 minutes tops.  I sprinkled on some chopped cherry tomatoes and we dug in!

This was a lot of mussels and was plenty for both Scott and I to share.  There’s a misconception that seafood and things like mussels are expensive but they are not.

A pound of mussels (which was way over 2 dozen mussels) cost me $6.99 and that fed two people as a main meal.  That’s pretty budget friendly! 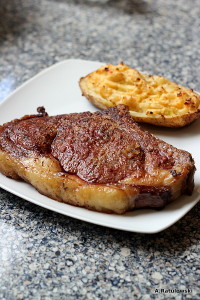 Favorite meal of the week, ribeye steak with a twice baked potato.  So good!  And gigantic!  I did not eat the entire steak, there’s plenty of leftovers.  The steaks were seasoned with Flavor God’s Garlic Lover’s and I seared each side of the steaks and placed them on a baking sheet.  The steaks finished cooking in the oven.  It only took a couple of minutes since ribeyes are best at medium.

The potatoes were super simple, no fuss twice baked potatoes. Baked potatoes with the insides scooped out.  To that was added sour cream, cheddar, horseradish, and some green onion.  Stuffed and baked again until cooked through and bubbling.

Great eats this week plus utilizing leftovers as much as possible.  Minimal meal planning for this week because Scott and I have some big plans for the weekend!

Bacon and steaks from The Boar and Bull

Pork and eggs from Jodar Farms