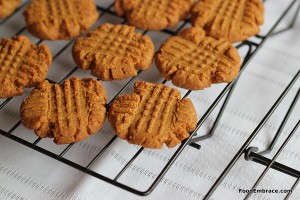 For the record, I think e-collars for animals is a cruel punishment.  Unfortunately the inflatable donut collar won’t work in this situation as he would still be able to reach his front paw.  So hanging out with him until his wound is healed is how we have to roll at the moment.

When he was sleeping peacefully, with Scott on a nearby couch, I was able to sneak away into the kitchen (which is connected to the living room, hooray!) and make some yummy eats. Recipe for each item soon!

I made some flourless PB cookies which taste as awesome as they look.  My version is a little different than the standard ones but not by a whole lot.  I had been dreaming of peanut butter cookies all week long and finally had the chance to make some. 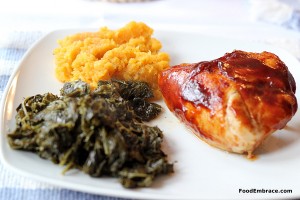 Dinner was gobbled up super quick!  I brined some chicken breasts with some tequila for extra kick!  I then brushed mine (Scott just had roasted chicken breast) with some BBQ sauce during the last 5 minutes of cook time.

I didn’t have any homemade sauce on hand but Bullseye worked in a pinch.

We also had some mashed butternut squash and braised kale.  I inhaled my dinner!

And then had some cookies as I watched the Pens smoke the Devils (take that New Jersey!).

It was a good day!