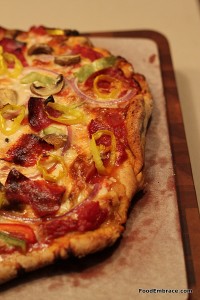 This is all I have for you this week in regards to pictures of our pizza. I was very hungry when it was time to eat and I was slightly disappointed in the way the pizza turned out, resulting in not taking many pictures.

Bummer because I was looking forward to this pizza all week!

On Monday, Scott and I went on a scouting mission to one last appliance store to check out kitchen appliances.  Our kitchen needs all new appliances, save for the stove because she’s new, purchased a few years ago.

President’s Day is a big sale weekend when it comes appliances and bedding it seems so all weekend long we were off hunting for the best deals, taking pictures, and comparing specs.

My patience for this is limited.  Scott will compare and research till his eyes bleed.  Partly because he enjoys research but mostly because plopping down large chunks of money and making a decision are not his strong points.  I, on the other hand, have about a two day limit before a decision will be made whether you like it or not.

On Monday , after checking out our options at said store, we went grocery shopping where I purchased some salami and pepperoni.  Things that I really rarely ever buy. Part of the reason these were purchased were thanks to frustrating appliance shopping.

Since I had these items on hand I decided to recreate our favorite pizza from Figlio.

I had been dreaming about this pizza since Monday.  I could hardly contain myself by Thursday.

As I was putting on the toppings, it occurred to me that the peppers seemed awfully watery.  I put that aside and baked the pizza.

I was right though and we ended up with a watery pizza and soft squishy crust.

I was so bummed out!

Meh.  It’s been that kind of week.

The upside is that we did purchase some new appliances this week (from Home Depot and a super helpful employee) and they will be delivered on my birthday.