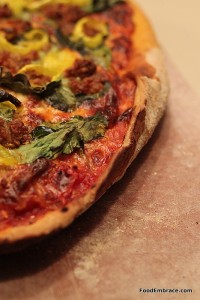 Pizza Thursday is still going strong over here at the HQ. It’s become a nice little weekly tradtion for us. It signals that we’re getting close to the end of the week and that the weekend is within viewing range.

For pizza this week, I wanted to keep things simple.  I think this is the least amount of ingredients I’ve put on a pizza.  Usually I like to load it up with all kinds of stuff but this week it was all about minimal ingredients but great flavor.

I kind of feel like that’s how I’m approaching the holidays this year.  Simple and minimalist with the focus being more on the celebration and the moment instead of all the “stuff”.

Yes I still decorated and got out all my trees but I didn’t put out all of my decorations.  In fact a good many of them got packed back up and stored away until after Christmas.  When Scott was returning everything to the basement he kept asking me, “And this too? And these over here?”  “Yes, all of that stuff can go back.”

I think when I start packing stuff up again, I’m going to weed out a lot of decorations.  My tastes are changing and I’m less inclined to want all kinds of little tchotchkes around, preferring trees, lights, and garland instead. 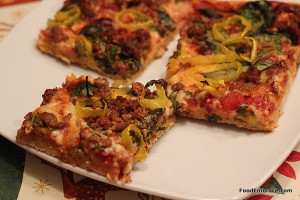 We watched the Pens game while eating our pizza.  Oh it was a rough game to watch.  Intense and sadly with a loss at the end. Not nearly as many penalty minutes called as I predicted but enough that it got to be ridiculous.  A few of the big guns are missing from the lineup and it’s noticeable.  Especially on power play and penalty killing situations.  When your team can’t score on a 5 on 3 situation, some things need reassessed and addressed.  That’s the amateur coach coming out.

But enough about hockey, tell me about your holidays! Did you go all out with decorating this year or did you keep things simple?