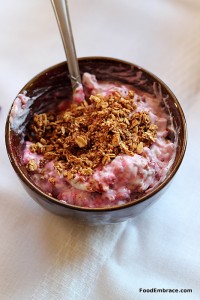 I have used an obscene amount of bourbon this week. I have been cooking with it like crazy.  I’m not a liquor kind of gal.  It just doesn’t sit right with me but I do love to cook and bake with it!

I made bourbon apple sauce which will be featured soon because it’s too delicious to not discuss.  I made some bourbon cookies for the holiday cookie recipe exchange.  I made some eggnog custard that I also added bourbon to for extra kick.

Even Scott started talking bourbon and all week long had been hinting at bourbon pancakes.  “Well, let’s say you made bourbon pancakes….”, he said during a conversation about recipe development.

“Back to those bourbon pancakes”, during a business development conversation.

So on Sunday morning, I knew that I’d be making some bourbon pancakes for my fella because I can take a hint.  After my morning run, I had some yogurt with homemade granola and homemade cranberry-raspberry sauce (Hold the bourbon. This time.).  I putzed around online and watched Food TV.  Finally when Scott go up, I started prep for Sunday Breakfast. 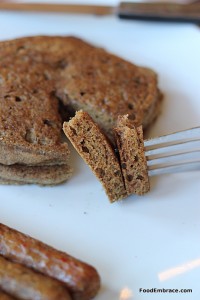 You know it, Bourbon Pancakes. With a touch of Grand Marnier for background sweetness. 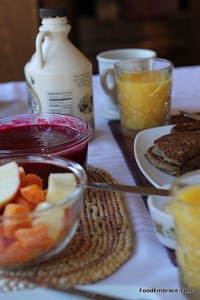 I pulled out the cranberry-raspberry sauce to drizzle on top but both Scott and I preferred maple syrup instead.  Fresh fruit and OJ along with a few chicken sausages completed breakfast.

We did house chores yesterday after cleaning up the kitchen.  The windows needed some chaulking which was Scott’s chore.  I cleaned up inside and rearranged some furniture.  I also ironed some cloth napkins which kind of annoys me.

I mean, the whole point of cloth napkins should be wash and go, right?  If I have to iron them, I’m certainly not going to use them because who wants to iron napkins after each washing?  They’ve been regulated to the linen drawer for picture purposes only.

I had been dreaming about dinner all week and couldn’t wait to start making it! 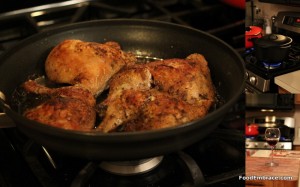 I have been craving chicken like crazy.  I don’t know why either because it’s my least favorite meat.  However, when you’ve got a craving, go with it, because it means your body needs something.  I went with mine!

I had some lovely chicken leg quarters that I seasoned up and pan roasted in the oven.  I seared each side on the stove first, then added in a splash of stock and some red wine to the pan.  Tossed the pan in the oven at 400 for about an hour.  Gorgeous and perfectly cooked chicken legs!

A splash of wine for the cook while the potatoes and collards cooked on the stove. 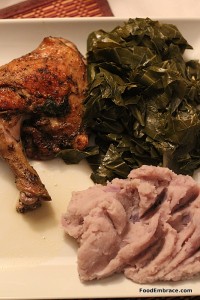 Dinner was complete! Beautiful roasted chicken legs, purple mashed potatoes, and simmered collard greens.  After the picture I topped my potatoes and chicken with some pan gravy.

I’m hoping to have collards for Thanksgiving dinner and wanted to practice cooking them a bit.  These were great but I would like them to cook a little bit longer next time.  I’m ready for Thanksgiving though! 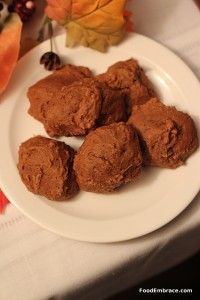 After dinner, it was time to relax on the couch with some hockey and cookies! These are the bourbon molasses cookies I mentioned earlier.  Perfection!

The time change added to the perfectness of this weekend.

How was your weekend and did you get a chance to eat anything lovely?

4 thoughts on “Shades of Bourbon”