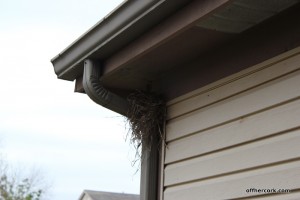 We have a Mama Robin who has decided to take up residence on a gutter elbow not far from our front door.  We saw her building the nest last week but we had a rather large wind storm (does anyone else use that term, or just me?) and the nest actually blew away.  It wasn’t big at that point so we didn’t think too much about it.  We didn’t even think she would come back.

But we were wrong and in a day this gigantic nest was built.  Gigantic only because it hangs down pretty far and looks like a general hot mess of a house but I imagine it’s cozy on the inside.

We’ve seen Mama Robin fiddling, fussing, and getting situated inside so I can only assume that there will be little blue eggs soon.  I kept a watchful eye out and made sure to snap a picture when she was off tending to other errands.

A few years back we had a robin build a nest in the pine bush that is right next to our front stoop but she did not come back after that.  Which is smart because that bush isn’t really all that protected.

I’ll be interested to watch the progress and hopefully will get to see some fluffy fuzzy babies.

In other news, I’ve got no news.  I’ve been battling a stupid cold since last week and it’s ticking me off.  I haven’t run or worked out at all because I’ve had no energy and I didn’t want to push myself too hard to hinder recovery. It was flip-flopping, first I would be a total wreck sneezing every few minutes and blowing my nose constantly. Then the next day I would be loads better.  Then the day after that, back to sneezing and so on.

Scott and I hosted a beer tasting at our house on Saturday and there was a moment where I thought I was going to have to cancel.  I felt like I was on the mend so we still had the party.  Friday was a horrible horrible day but Saturday I felt loads better. 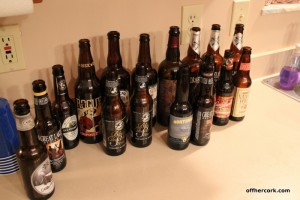 The party was lovely with much beer and laughter.  Sunday though? OY! Back to being a wreck.  Thankfully by the end of the day on Sunday I was getting to a point where I could breath and was able to have a great sleep (12 hours!).

Today I’m not quite as stuffy nor do I have the need to blow my nose as much.  I am, however, in the occasional cough and constantly needing to clear my throat stage.

Let’s hope that this means we are on the road to recovery.  I haven’t had a cold in years (hooray healthy living!) so the fact that I’m down and out is making me cranky.  Today I’m going to try some light exercising, like yoga, because I need to MOVE.  Not exercising makes me feel very blah and icky.

How have you been? Tell me how your weekend was and if anything exciting happened!