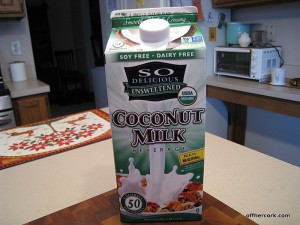 Since I mention this stuff all the time in a lot of my recipes, I figured that I should explain it a little bit in case you haven’t tried it yet or are curious about it.

I’ve been using it for months now.  Well maybe even coming up on a year?  That’s totally possible.

Our affair goes a little something like this, I spotted it in the grocery store and decided to give it a try.  I bought the vanilla version and really it did nothing for me.  It was a tad sweet and ended up not being my thing.  It didn’t work in coffee as a creamer substitute, and I didn’t like making oats with it.  So I forgot about it, putting it aside as another product that didn’t really fit the HQ needs.

Then something nudged me and said that maybe I should give the unsweetened version a try.  I did and haven’t stopped buying it since.

Scott and I aren’t huge milk fans, we used to be back in the day but now not so much.  We use a good bit of soymilk throughout the day, it goes in our oats and it goes in our coffee.  I was looking for a product that I could use in baking, cooking, and smoothie making that was not soy or dairy based. While we personally don’t have an issue with soy, I don’t want to overload our systems with it either.  Regarding dairy, we just prefer it to be in the form of cheese or yogurt or butter.

We’re also not a big fan of almond milk. You can see how this narrows down the playing field a great deal.

I turned to Unsweetened SO Delicious Coconut Milk to help me out and it’s proved to be a winner.

First off it doesn’t taste like anything, not even coconut.  It is almost like a slightly thicker and creamier water.  Honestly.  But it works great for cooking!  I use it to make mashed potatoes, to make cream sauces, to make soups, and even with baking.  You can’t tell coconut milk has been used and no one would know you didn’t use regular milk unless you told them.

It makes great smoothies, resulting in a really creamy smoothie that isn’t overpowered by a coconut flavor but instead you get all the flavor of the ingredients that you used. 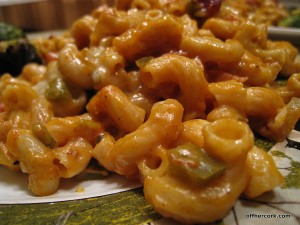 Mac ‘n Cheese, creamy soups, and fantastic gravies I have made with this stuff (just to name a few!).  I use it in anyplace where I would use milk or cream.  I’m very pleased with the product and am happy that I gave it another chance.

What are your thoughts on coconut milk?

Disclaimer: I regularly purchase this product on my own and this review is entirely my own idea and content.