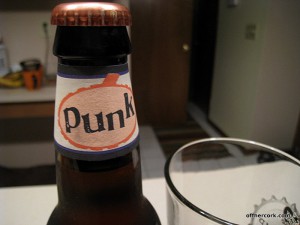 When people start talking about pumpkin ales, the first thing I usually hear are those touting the amazingness of Dogfish Head’s Punkin Ale.  It hasn’t come across my path until recently.  I’m not sure if I just wasn’t looking for it or if for some reason, it was never available in the places I buy beer.

Finally this season I spotted some and purchased it for Pumpkin Month.

Again, I have to credit World Market here!  They came through!

Admittedly I was excited to try this beer out.  So many people talk about it, it has a fun little label, and I love pumpkin beer.

Will this beer knock me over or will it go out like a punk?  (Oh snap!) 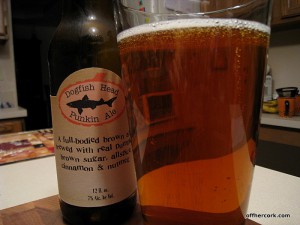 We opened it up and got started with the testing!

I always smell a beer right out of the bottle and then once I pour it, I smell it again.  This pumpkin ale had a nice aroma to it.  You could smell the spices right away, though it isn’t strong enough to smack you in the face.  I was a little bummed by that.  Nonetheless there was a hint of spice there, so I had high hopes.

You can’t tell in the picture, but this ale has a nice deep color to it.  Yes you can still see through it, but I certainly wouldn’t toss it in the “light” category.  I was pleased with the color and this set the foundation for expecting a lovely beer.

Head retention here was really non-existent.  In the time it took me to pour the beer and then turn my camera on, which was right next to me, the head was gone.  Poof!  Just like that!  Boo.  I didn’t even get to see it!

This beer falls flat on pumpkin taste.  The smell is there and it creates a lovely anticipation but no delivery on taste.  There’s hardly any pumpkin flavor and there’s no spice at the finish at all.  Despite the nice coloring the beer is very light and a little weak tasting. It literally almost tasted watered down.  With all of the hype, we weren’t impressed at all.

In summary, we were really disappointed in this beer.  With so many people in love with it, we thought that it was definitely going to bring in the pumpkin flavor.  It let us down.   Since it only comes in a four-pack it is an expensive seasonal. Close to $9 for four bottles of beer!  That’s a pricey!

I know a lot of people dig it, but Dogfish Head Punkin Ale isn’t really our thing.  It’s drinkable but not something I would actively seek out and purchase again.

Have you had Dogfish Punkin before?  What were your thoughts?