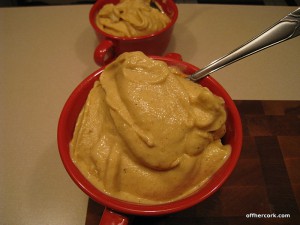 We eat a lot of bananas in this house.  So much, that I’m pretty much convinced the grocery store checkout clerks find us a bit bizarre as we pile up at least 5 bunches of bananas.

They get used in oatmeal and frozen ones get used in smoothies.  Rocky also gets a frozen one every night in his kong for his bedtime snack.  We eat them a lot!  So it’s a good thing we love bananas.

When I came across Gena’s tip for using frozen bananas to make a soft serve style dessert I was intrigued and knew immediately that we would love it.  We’ve had frozen banana dessert a bunch of times now, our favorite way using chocolate soymilk and peanut butter.

I know, it’s pretty much heaven.

Being that it’s fall, it was only a matter of time before I tried my hand at using pumpkin in this dessert.

I used to be in love with pumpkin ice cream.  It was my very favorite flavor!  Then I started becoming more aware of ingredients and what exactly I was putting into my body.  Sadly the majority of pumpkin ice cream out there (Jeni’s excluded obviously) has a ton of crap in it.  I stopped buying it and became a very sad Andrea.

Break frozen bananas up into chunks or at least cut them in half.  In a food processor or heavy duty blender if you have it, add all ingredients. Start with 1/2 cup of the soymilk.  Blend until smooth and creamy.  You might want to start the process with a few pulses first and then let it go for a bit.  If it starts getting too thick on you and won’t blend, add in some more of the soymilk.  Slowly until it starts moving again and blending.

Dish up into ice cream bowls and serve immediately! 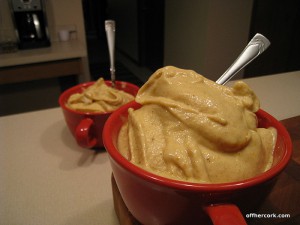 You can see that this makes two HUGE bowls of “ice cream”.  It tastes exactly like pumpkin ice cream.  It is made with bananas, so the banana flavor is there but with the pumpkin and spices, you hardly notice it.  It tastes like fancy pumpkin soft serve.

I ate everything in my bowl and then licked it clean.

Be careful with the amount of cinnamon you add.  Cinnamon in large quantities can come across spicy with heat to it.  You don’t want this in pumpkin ice cream.

Now go make yourself a bowl!