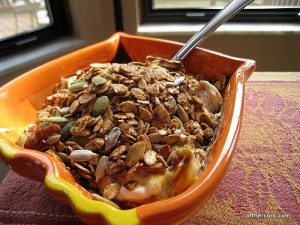 Hello my pretties!  How was everyone’s week last week?  Mine was busy!  I came right home from Atlanta and had to hit the ground running when the week started.  I had to do some catchup work and then there were a lot of business meetings and connections scheduled.

Thursday I had my speaking gig with the local chapter of the PR Society of America to discuss the relationship between bloggers and PR reps.  It was really interesting and I loved getting a chance to meet and talk with PR reps about their experiences with bloggers.  There’s two sides to every relationship folks!  More on that at another time, I hope to do an article about it.

On Saturday, Scott and I attended a sausage making class put on by friend and fellow blogger, Rachel!  Actually it was a joint effort, as Rachel’s husband, Alex taught the session with Rachel providing assistance.  I learned a lot and realized that I definitely need to be making my own sausage and grinding my own meat at home.  Easy peasy!  I didn’t get to take any pictures during the event but once I start doing my own, you can expect a post about that as well!

After a quick trip back home to feed Rocky and eat a quick lunch, Scott and I headed back out to run some errands.  We hit up World Market first!  Man I love World Market!  They have a bunch of fall stuff out now, everything from placemats to Halloween decorations.  So fun!  We walked out with three kinds of pumpkin beer (for an upcoming project! Stay tuned!), one of which being my absolute fave, and some wine.  I also had some knick-knacks and some plates!  They had a sale going on their white square plates and you all know how much I love square plates!

Sunday was my long run day and man did it feel good to be out hitting some double digits!  Last week I missed my long run because I was flying back from Atlanta.  I don’t know about you, but I definitely am not of strong mind and body enough to crank out a double digit run after flying.  I quickly realized that during my run, I had not eaten or drank enough water on Saturday.  Whoops!  It had occurred to me that this might be the case but I thought I was in the safe zone, but after about 5 miles I realized that I was not.  I was able to still run 10.5 miles but man was I hungry when I was done.  I slammed two glasses of chocolate soymilk to quiet my stomach and get some fuel moving through the body, and walked Rocky.  After a very lovely shower, I had some yogurt with granola and a dab of pumpkin butter that Scott picked up at World Market.  It was alight but super sweet.  Thankfully I only added in a small spoonful!

Since we had pumpkin French toast on Saturday, I didn’t want anything cakey or syrupy on Sunday.  I opted for eggs instead! 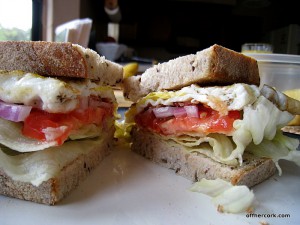 Egg sandwich on quinoa flax bread with lettuce, tomato, onion, and bacon.  The eggs and bacon were local.  I’m lucky that my Whole Foods carries a lot of local products including eggs.  When I can’t get to the farmer’s market to pick some up, I can swing by Whole Foods and get some. 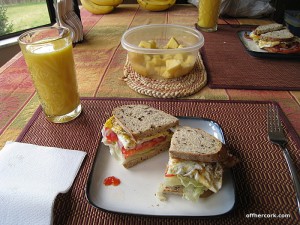 Really simple breakfast yesterday with the addition of pineapple and a big glass of OJ.  I loved this sandwich paired with the whole grain bread!  I’ve done this before with sprouted bread and on occasion a big white flour bagel, neither of which fill me up or keep me full as long as this bread did.  It was amazing!  I don’t know if I can go back to the other versions now.

Normally one a long run day I will be looking for a snack midway through the afternoon and have some extra fruit or whatever but not yesterday.  I was good all the way till dinner!

I prepped as much stuff as I could for dinner in the evening so that I wouldn’t have to worry about it later in the day.  I had high hopes that we would be able to grill since we haven’t grilled in ages.  Sadly that was dashed!  Around dinner, the winds really picked up and the temperature dropped which made the air a lot cooler.  That wasn’t the problem, it started getting really overcast and looked as if it was going to rain.  There were thunderstorms in the forecast and I didn’t want to chance starting the grill only to have to stop because of rain.

So we grilled inside instead!  With a grill pan, no worries, I didn’t bring the grill inside.

On the menu was coleslaw and steak fajitas! 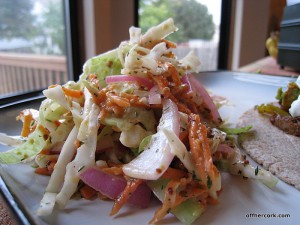 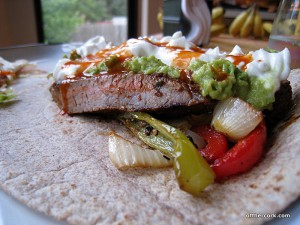 I used a skirt steak (local) and added a dry rub to it that consisted of:

And let that hang out in the fridge all day long.  Then when I pulled it out in order for it to get to room temperature I let it sit in a quick “marinade” made of:

The steak sat in that for about 1/2 an hour or so, then I heated up a grill pan and cooked the steak till about medium.  I let it cool and sliced it up for the tortillas!  While the steak cooked and cooled, in an oven I roasted up some red pepper slices, onion slices, and some Cubanelle pepper slices. 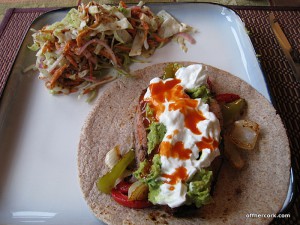 Served on whole wheat tortillas and topped with homemade guacamole and sour cream (Fage) with roasted peppers and onions.

Angela asked me a while ago, but I don’t know if she saw my answer since I answered it in the comments section so I’ll repeat it here.  I use 2% Fage as my sour cream and do not use sour cream at all.  The Fage works so much better than actual sour cream and it tastes better too!  Plus with it being yogurt you are getting additional protein and good bacteria in your meal!  I use 2% because I like fat.  Fat is good for you!

After dinner we kicked it watching an old Sherlock Holmes movie and then we watched an episode of House Hunters that we had already seen but were still in awe about.

Speaking of HH, did any of you see the International episode with the couple that was looking for a vacation home in Puerto Rico and their budget was $1Million and they were going to PAY IN CASH?  Let me repeat that in case you misunderstood, they were going to purchase a $1MILLION dollar home and pay for it IN CASH.  A MILLION DOLLARS IN CASH.

That’s how the crazy rich roll I guess!

Wine for the evening was a white. 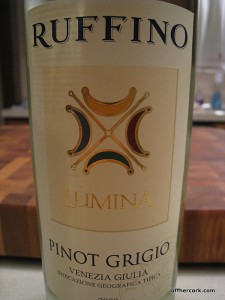 It’s a nice light Pinot Grigio that makes for a great sipping wine.

I also had a bowl of SO Delicious chocolate ice cream that didn’t make it onto the camera because no one thought about it. :p

How was your weekend?  Did you do anything fun and exciting?

This post was part of Homespun Sunday! If you want to participate, please let me know!

8 thoughts on “Getting Things Done”