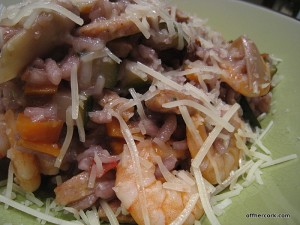 I put some shredded asiago on top and it was delish!  I do not add cheese to the risotto but put it on top instead.  This helps me control the cheese amount better and then everyone can have as much or as little as they want.

I know this isn’t technically how risotto is done but it works for us! 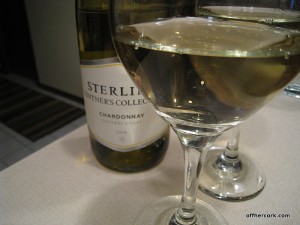 I got up this morning to snow on the ground.  Bleh.  I’m over snow. :p  When I took Rocky outside for his morning potty run, I noticed how not cold it was.  Hrm.  Then as I headed out for my run I realized how much of a mess everything was turning into.  It was warm out so the snow was melting quickly, turning into a slushy mess on the roads.  Yick!  I did 4.5 miles and headed home.  It was a tad slippery out and my hamstrings were getting a little tight.  I was perfectly fine with a 4.5 mile run though!

I’m feeling pretty good about my training so far.  My long run is up to 8 miles and I think I might be able to jump that to 9 here soon.  The half I want to run is in May and I should be pretty ready to knock that out by then!  My goal is to have run 13 or at least 12 miles a few times before the race.  I know this goes against most training plans but to be perfectly honest, I don’t understand the theory behind cutting the training short.

Last year my training plan cut me off at 10 miles with the expectation that come race day I would just tack on those extra three miles no problem.  Sure, I’ll just add on another 5k there at the end on race day!  And marathon plans do the same, cut you off at 20 miles expecting you to just add those 6 miles on at the end.

Sorry, but this seems like it’s covered in Crazy Sauce to me and I think that’s part of the reason why I got injured last year (combined with not enough strength training).  Adding on a mile a week was too aggressive for me, so adding on 3 more miles, no go.  I have to take it slow and add on a mile every few weeks or so.  I have to be able to run something consistently so that my body gets used to it before I start increasing my miles.  Otherwise my legs get tight and I’ll strain something.  Again. 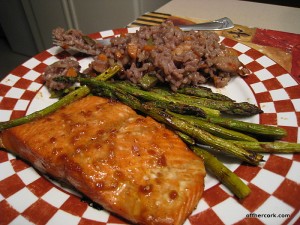 Salmon with a marinade of:

Asparagus on the side with:

And leftover risotto to round out the meal.

Alright gang, wanted to bust this out so I can hit the bed to read! Catch you on the flip side!

P.S. I forgot to take a picture of today’s smoothie!  Whoops! I must have been too busy stuffing my face with lunch. :p