Hi gang! I could tell this morning when I looked outside that the sun was going to make an appearance today.  You can sort of get an impression of what the day is going to be like when you’re up just as the sun is starting to rise.  Despite the fact that Scott and I would like to move elsewhere, the one upside to Ohio is that we do at least get some sunshine during the winter months.  Hooray!

Thanks to the crazy wind we had last night, most of the snow had blown away leaving the roads and sidewalks clear.  There were a few ice patches but they were easy to avoid.  It was colder this morning than it was yesterday morning but there was no wind so I was able to bust out five miles no prob!  Well my legs felt a bit tired today but I didn’t let that get me down, I powered on through!  Then I did week 2 of Gina’s Winter Shape-Up and took a much needed shower.  Highlight of the day was holding a plank for a whole minute! WHOO! That’s my first minute long plank and I’m feeling very smug.

I better watch out because I just might get addicted to lifting after my runs!  It makes me feel a little more balanced and loads better with workout highs!  Whooo!

My HRM is still bunk but I’m taking Kim’s advice and looking for a new battery for it.  Needing a new battery totally makes sense!  Hopefully that will work otherwise I may have to start the mourning process.

Lunch was late today because Scott had some conference calls going on.  By the time we got to eat, we were hungry and grumpy!  Smoothie today was glorious though:

Delish! But apparently I forgot to take a pic of it! Sorry ’bout that gang.  It was purple and beautis!

Rumors of an Apple Tablet coming out were true and Apple released it’s new iPad today.  Yes, iPad.  Back in the day I used to have major Apple love and now I do not.  However if I was on my own without a Scotty in my life, I would be using Apple (if I could afford it!) because I don’t know diddley about Linux and I don’t trust Windows.  Anyway, I’m not really sure what the point is behind this whole tablet business.  A cross between an iPhone and a laptop? First impressions are not so great.  Maybe it will grow on me and I’ll appreciate it more.  Right now, I’ll just love on my iPhone because as much as Apple annoys me, I do lurve my iPhone! 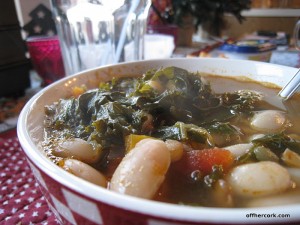 Dinner today was soup!  Kale and white bean soup with some lentils and a little extra veggie thrown in for good measure!  I also added in some kielbasa for Scotts.  I picked around that though as I was not in a kielbasa mood.  I know shocking!

Pure comfort food dinner and it was awesome. 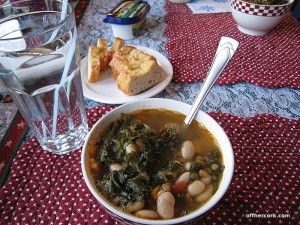 Bringing back the cheesy white bread!  Some asiago bread on the side which hit the spot.  Alright gang, I’m out! I want to get some chill time in for a minute before heading out to SF.  Till tomorrow pretties!