Hi gang!  Last night after stick fighting class I had a snack. 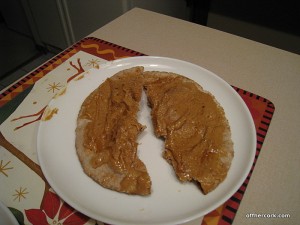 A whole wheat pita with PB and honey.  I only ate half though, that was plenty for me.  I was a bit hungry and since I planned on running a good distance this morning, I figured the extra fuel was no problem.

And then I didn’t run.  Boo!  When I got up this morning there was some seriously crazy wind going on.  Like hardcore wind.  No way I’m running in that.  I hate cold winter wind!  Back in the day when I first started running and was on the weight-loss train, I would have ran in it for sure.  Now that I’m in maintenance mode I can be a little bit more laid back with the runs (not much because I still need to get my run on or I get really cranky).  If it’s windy out, then I’m not running.  Winter wind I’m talking about, in the summer it’s not so bad.

Later in the morning I took Rocky out for a walk and it was still windy and dang cold.  We made super quick work of that walk for sure!  And then I came home and cuddled up with a smoothie. 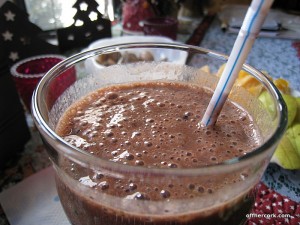 This is my favorite kind of smoothie.  Even if the banana was missing, it would still be my favorite smoothie combo ever.  The soymilk makes it creamy, rich, and thick.  It also helps the spinach and fruits to just melt away leaving a very smooth smoothie.  It’s divine!  I don’t have it everyday because I have soymilk in my coffee and in my oats (or oatbran) so I don’t want to overload myself on soymilk.  Having it on occasion makes it more of a treat and keeps it ranked as my fave.

Since I didn’t get a chance to run this morning, I was super looking forward to conditioning class this evening!  Despite the crazy cold, we braved the weather and headed out.

Then you know what it was, time for Pizza Thursday!  Wheee!!! 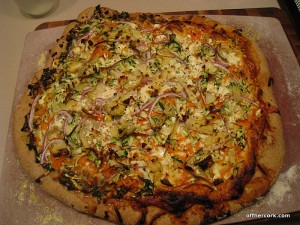 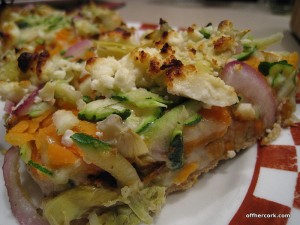 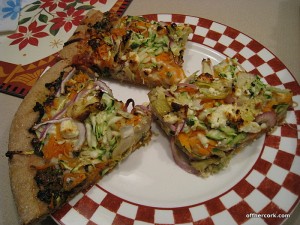 The spelt dough was giving me some problems today.  It stayed sticky and it was really airy.  I dunno what was going on with it but it turned out really yummy!  The feta was amazing on top!  It just browned and warmed through.  It was nice to have a burst of salty cheesiness that was also very creamy!  It didn’t melt or anything just got very warm and delish.

Now it’s wine time!  Then dessert and I’m totally thinking chocolate is on the menu for this evening!  Till tomorrow guys!