Hello my pretties!  I have a confession to make to you.  Listen and don’t judge.

I totally pulled out the heating blanket and put it on the bed for warmth last night.

I couldn’t take the freezing cold sheets any longer!  I didn’t want to since it’s still technically only September but I was just getting too cold in bed.  It’s chilly here but the rain and dampness is what makes this situation worse because that’s a crappy kind of cold that chills your core.

So last night I snuggled in bed with the heating blanket and slept all snug toasty with it.  I am not ashamed!

And also for the first time ever, Scott and I are watching Dancing with the Stars.  Let me explain, I like reality TV about as much as I like being punched in the throat.  It is just not my thing.

However, three of the contestants interested me this season.

Chuck Liddell who was (is still?) an MMA guy.  If you don’t watch or dig on MMA stuff I totally get that.  I don’t watch fights too much myself because too many of the fighters just drop to the ground and piss around grabbing at each other.  If I’m watching a fight then I want to see a fight.  Anyway, that’s tangential and pointless blabber.

I wanted to see an MMA guy try and dance because I thought hilarity would ensue.

Next up on my list was Mark Dacascos, whom most people know as The Chairman on Iron Chef America.  However, he’s an accomplished martial artist and has some pretty sweet moves.  My favorite film of his is Brotherhood of the Wolf (French).  He’s fantastic!  And he also reminds me of my hunnies.

If I needed someone to play Scott in a movie, it would be Marc because they look very similar (only Marc is slightly darker skinned).

And then finally, Melissa Joan Hart of Sabrina, the Teenage Witch fame.  Except I go back old school and know her from Clarissa Explains It All (anyone? anyone?).  Just like I know Christine Taylor (Ben Stiller’s wife, Brady Bunch, Friends) from Hey Dude.  Any other Nickelodeon: The Early Years poeple out there?

And because of all of that, I risked a punch in the throat.

It wasn’t so bad, I actually am enjoying the show.  Chuck, while not great, is a whole lot better than I thought he would be!  I do think he’s going to leave soon though.  Mark Dacascos rocks it.  But he needs to lose the karate hands gimmick because it’s old and not funny.  And Melissa, well, Melissa needs some assistance.  She’s a little rough around the edges.  I’m behind though so don’t tell me who got kicked off! 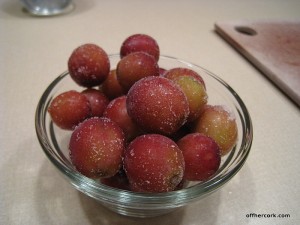 Anyone else watch?  I snacked on some frozen grapes while watching.  Mmmm  After the show is when I headed up to bed to read.  In case the timeline seemed off!

I got up this morning determined to run a good distance!  And I did, 4 miles!  In the damp cold and rain.  Ewwww!  But I ran it and felt tons better. 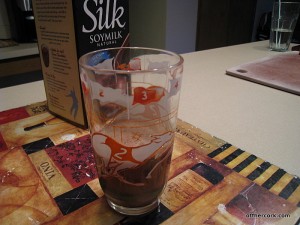 Little bit of CS and then I stretched and showered.  It was raining too hard to take Rocky out for his walk plus I was freezing cold.  I’m telling you the cold is getting to me a lot worse than it did last year.  Brrr!

After a shower it was time for some breakfast eats! 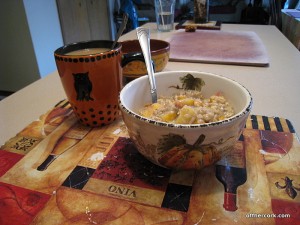 Nectarine oats, oh how it’s been too long.  I have one nectarine left and then our love affair is over till next summer.  What to do with my oats now?! *sigh*

I busted my hump today in the office.  Most of it involved correspondence but I’m trying to get things organized and in place before my trip and for my trip.  Details on that coming soon!

I took Rocky out for his walk and it was still raining. Ugh!  It was like a heavy misty rain, you know that kind?  There’s not a whole lot you can do to battle it.  We powered through and made it back home quickly.

I cleaned and did more officey things.  I have been a busy sister today!  And then I made lunch which did not help my cold state of being. 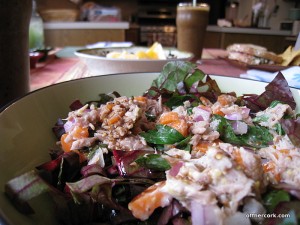 Tuna salad on chopped chard.  The tuna had: 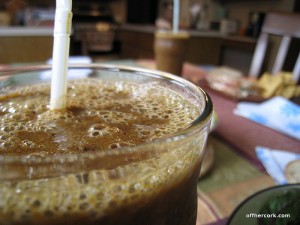 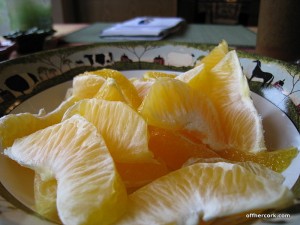 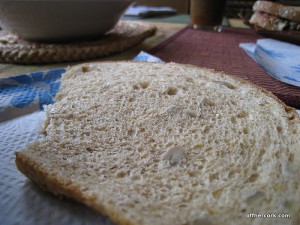 And a slice of Nature’s Pride 12 grain bread.  Goodness this bread is so excellent.  I will do a review on them soon! 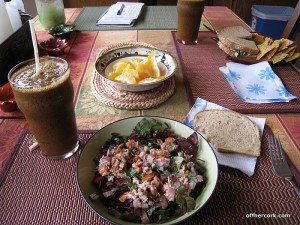 I don’t normally have bread with lunch but Scott had a tuna sandwich and I stole a slice.  Plus I need to taste-test it for my review!

After lunch was more office stuffs.  Can I be more boring? :p

I asked Scott which he wanted for dinner; pasta with veggies and tomato sauce OR a stir fry type dish.  He picked pasta!

I’m not surprised, my poor babes has been having a rough work day and pasta is his comfort zone.  Even though I’m not a huge pasta fan, I can dig on it sometimes and he’s a good cause. 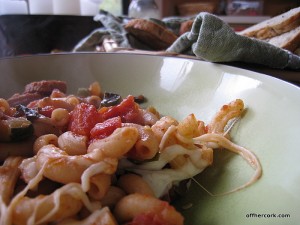 Whole wheat elbows in a light tomato sauce with:

Oh that wine smelled so good, I wanted some very badly as I was cooking.  Just a sip!  But I couldn’t. Stick fighting later, so I figured maybe it’s best I don’t hit the bottle just yet. 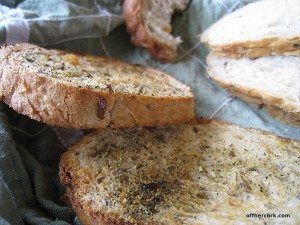 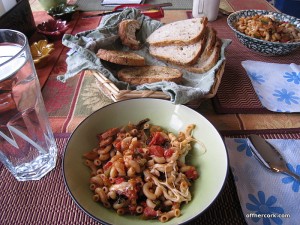 Dinner was so good!  The pasta and sauce were not heavy so they didn’t weight me down at all.  Mmmmm!  Little bit of shredded moz on top of the pasta too!

The HQ is hopping with packages!  Some stuff I got for surprise reviews to come.  Ooo intrigue!  And others are things I ordered, like a new watch.

Whew look at all those carbs I had today.

Carbloading in the house, woooo!

Alright gang, I’m off like top.  Gotta smack some sticks.  Till tomorrow!