Hi guys!  Last night after SF class and a quick walk with Rocks, I ran sprinted to my bed!  I read for a little bit and then zonked out.  I got up at 6:30 and busted through morning chores so I could get outside and get my run on.

I was only supposed to do 4 miles today but whatever, I did 4.5 because I’m that kind of rebel!  I had to stop a few times while people backed out of their driveways because they weren’t paying attention to me.  And once to make sure a dog didn’t get run over. :o  Good lord!  That goes for the owners and the driver of the van that almost hit the dog. 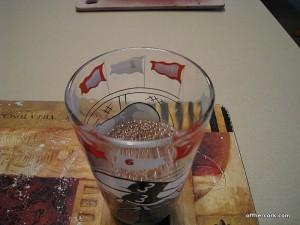 Alright!  I thought we’d just play for a second, jeesh.

A small glass of CS later and Rocks and I headed out for a lovely walk.  It was a bit humid this morning but still pretty decent outside.  For some reason the house-building activities are starting to pick up in one of the neighboring developments I run in, which means it’s time for me to start looking for other routes.  I know I keep saying this but for reals this time.  I’ve had my share of construction guy run-ins and I’m not looking for more.

Anyways, once we got back home, this sister stretched and showered and made some breakfast. 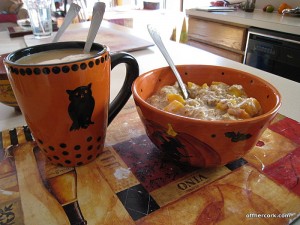 The last of my peach supply! (insert shock and horror face here)  I’m not sure if there are still some at the grocery store or not but I’ll be checking!  And some coffee all in glorious spooktacular dishes.

I checked email, did blog stuff, and also did some worky stuff.  Then it was more chores around the house like the exciting task of dusting and mopping.  I know you’re jealous of my day!

By this point my tum was telling me that it needed food super quick.  And I tried something new today! 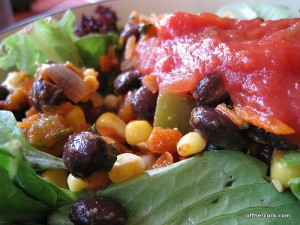 Salad!  I had some leftover filling from the peppers yesterday, so I put some on top of mixed greens with a dollop of salsa. 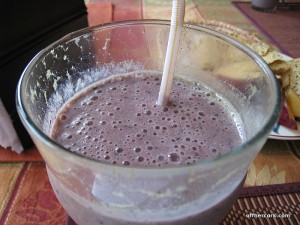 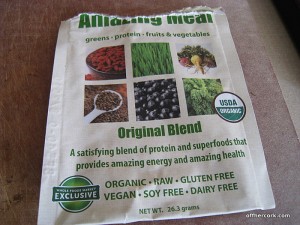 This was the new part because I actually used some Amazing Grass original blend in the smoothie. 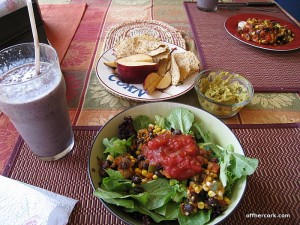 And then leftover guac with some chips and a sliced apple.  The apple is from yesterday so it’s a little oxidized looking but still mighty tasty!

The Amazing Grass was odd and I’m not sure I could handle it plain.  I first mixed it with plain soymilk and just a bit of water and blended it up.  It was alright but there was no way I could drink it all myself.  That’s why I added more liquid and frozen fruit.  That helped but I still couldn’t finish it.

And what I didn’t realize is that it’s labeled as a “meal” because it’s loaded down with protein along with all the fruits and greens.  UMPH it filled me up so much I couldn’t finish my salad. :o

The whole reason I tried it is because when I’m in fantastic SanFran I don’t know how much access to smoothies I’m going to have.  I wanted to try some alternatives for on-the-go if/when I need it.  Amazing Grass packets would be easy for traveling but um, yeah the taste isn’t so hot.  It’s got to be from the grasses.  There’s just this sort of after taste to it that hangs out on the back of my tongue and is a little icky.  I do have a chocolate version that I will try at some point, maybe that will go down better!

It’s San Francisco, so I’m sure there will be smoothie and juice bars all over, right?  Perhaps I’m concerned for naught!

After lunch and kitchen clean-up, Scott and I rocked it out to some Flight of the Conchords for a bit.  Love them!  And it just so happens that Olga loves them too! *hifive*

Live versions are much better than what’s on their albums or on the TV show.  I’m just saying!  If they sold an album with their live versions on it, we would buy it 10 times over!

After rocking out, I got busy doing some officey stuff.  Then it was time to head out to MT conditioning class!  Bring it!  I had a wee snack pre-workout. 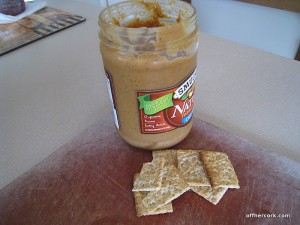 Some kashi honey sesame crackers dipped in PB straight outta the jar all savage like.  MMMM!

Class kicked my bootah!  And Scott thought maybe we could make a quick run after class to Meijer.

Um, no.  Not on pizza night mister! Forget. It.

So we came home, I grabbed the Rocket and we headed out for a shortie walk.  I was walking down the driveway and saw something laying in it.  I went over to see what it was and it was $10!! Holy crap!  I looked to see if anyone was around and no one was so in mah pocket it went.

Lightening shower and then pizza! 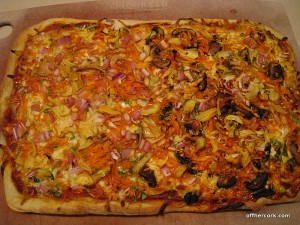 On a WF crust this week because I’m out of yeast.  The last bit of my yeast smells funny.  I don’t know how it could go bad when I’ve been using it.  Anyway, tonight’s pizza contained:

I have less cheese but lots of sauce (for me).  I was in a saucey mood this evening.  Roar! 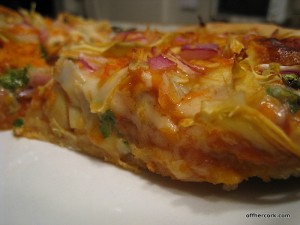 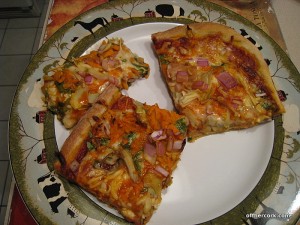 I inhaled those pieces too!

Now I’m off to get my wine and dessert on!  Tomorrow my pretties!