And today is our Friday and that means vacation starts!

We got back from SF late last night. UMPH! After all was said and done, and we were sitting on the couch it was after 11pm.

I had a small munch of: 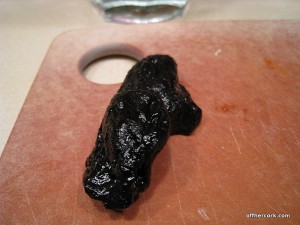 I apologize for that picture but it’s prunes, there’s only so much I can do to make them “attractive”.

I can assure you that it’s two prunes in that pic as well. And some peanuts. My dad loved peanuts.  He would get those big huge jars of it and sit in his reclining chair and watch TV.  He loved them so much that he would get peanuts as Christmas gifts.  Personally, I always thought he was off his recliner.  What’s so fantastic about peanuts?  Pffftttt

And now I know because I love roasted and salted peanuts.  And if someone gave me a jar of peanuts for Christmas I would be a very happy girl. I don’t have a recliner myself but I do have a rocking chair that was my grandmother’s who was my father’s mother. And full circle!

Then I hit the hay and crashed hard.  We have things that need to get done today, (Hello grocery store? Yeah you and me have a hot date and don’t try to stick me wtih a huge bill either because I will judo chop that into nothingness.) so the original plan was to get up early.  But since 11:30pm is way past Grandma A’s bedtime, I did not turn on the alarm.

Rocky let me sleep till about 7:20 and then he started with the huffy puffy.  I honestly don’t understand his hurry because after he eats breakfast and goes potty, he goes back to bed.  “Hurry up and take care of me so I can get back to sleeping!”  Silly boy.

I changed into long capris and a long sleeved shirt because it was fricking cold this morning.  For July and our highs have only been in the 60s with 40s and such in the evenings.

I busted butt because it looked like it was going to rain any minute and I did not want a cold shower that early in the AM.  At least not before I got all hot and bothered.

I did 3.5 today and it was just okay.  My legs were a little tired because we did silat style takedowns last night in class.  Silat is an Indonesian martial art and the takedowns they do can wear you out!  So my run was super slow this morning and I almost didn’t make 3.5 but I pushed myself and carried through.  Whoo! 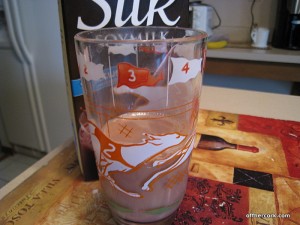 I had some CS and was back out for a quick walk with Rocky.  I was freezing by this point and wondering if people would ask me where my grocery cart was if I decided to wear my toboggan (that’s winter cap/hat to those of you with less colorful language) in July.  I could have used it though, my ears were cold.

When we got back home, I woke up Scotty and changed into some warm recovery clothes.  Coffee and breakfast were calling my name! 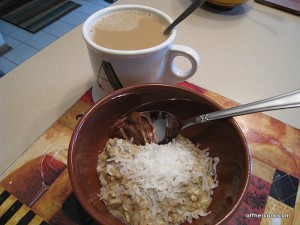 Hello oats!  Very simple today and finally with a banana!

Mix-ins were coconut and  a small scoop of dark chocolate PB.  Coffee was amazing and during my procrastination attempts I went in for another cup!

Then I proceeded to sit at my computer and procrastinate as much as possible.  Finally after hours of sitting on my tookis, I got up and cleaned the house.  Then I made lunch! 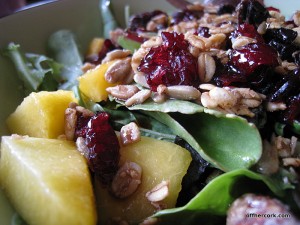 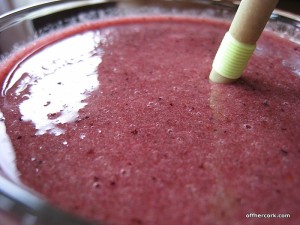 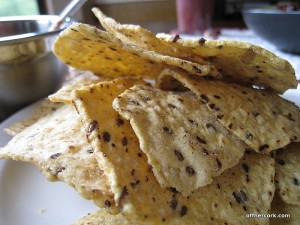 Crackers? Wait a sec, what is this bidness right here?!  No crackers today guys, I was in the mood for some chips and salsa!  FoodShouldTasteGood Multigrain chips and some salsa. 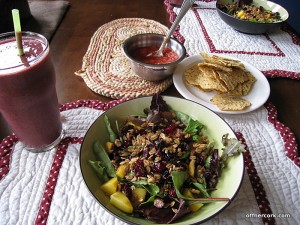 Lunch was fabbo!  And perfect fuel for what I’m sure is going to be a marathon grocery shopping trip.  I’m making sure my iPhone is fully charged and checking my list twice.  We need basics and some special stuff for our anniversary!

Our wedding anniversary is this Sunday, the 5th.

We always take vacation for our anniversary so we can chill and reconnect with each other.  We actually don’t go anywhere but stay home, relax, and do whatever.  This year I have some things up my sleeve that Scott doesn’t know about.

Not a bunch of stuff just some different things.

In honor of our anniversary and just for shits and giggles, I’ve decided to post some Scott and Andrea Trivia while we’re on break.

Scott and I met in college but we didn’t go to the same school.  He was visiting someone who lived on the same floor as I did (we were in dorms) and that is how we officially met.  We didn’t start dating until much later.