Warning: Parameter 2 to WPE\Site_Preview::the_posts() expected to be a reference, value given in /home/customer/www/foodembrace.com/public_html/wp-includes/class-wp-hook.php on line 303
 Wednesday, April 15th, 2009 | Food Embrace

Hi guys!  Today has been a whirlwind because I have been doing tons of things all over the house.  I am just now sitting down for a second to take a breath (4:30pm).  Ever have days where you wish you didn’t have plans so that you could keep going with what you’re currently doing?  Yeah, I’m having one of those days today.  Wish I didn’t have to stop!  Finish time on this post is 6:20pm.  Zoinks!

Last night while Scott and I watched a game, there was a snack!  New for us: 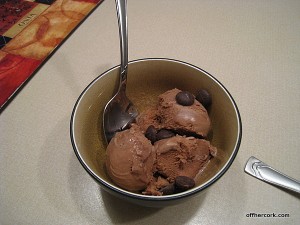 Dark chocolate frozen yogurt.  Oh man it was so good.  I was going to eat it plain and then Scott said, “Hey, I bet some of those dark chocolate chips would be good with it.”

And so I added some to my bowl and then I remembered why I don’t like chocolate chips in ice cream or frozen yogurt.  The chocolate chips get cold and thus turning a bit too hard for my liking.  Ick.  I ate them anyway though.

This was the perfect treat!  And I was in bed last night by 10pm!!  Crazy!

I got up early this morning intending on a run, however when I took Rocky out this morning, it was so cold.  The damp cold that goes right through to your bones.  Ewwww I so did not want to run in that.   I could easily run tomorrow, I told myself.  I have so many things to do today, it would be no big deal if I stayed in. 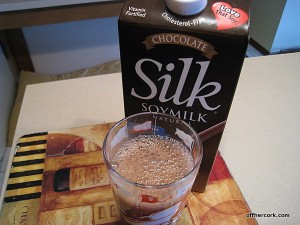 I went back and forth, no lie, for an hour and a 1/2.  I looked at yoga alternatives.  I looked but couldn’t find the OnDemand station on my TV.  I know but it’s DirectTV and somethings they are very strange with their navigation stuff.   Anyway, I was seriously talking myself out of it.  What got me out the door finally was that I didn’t know if running + conditioning class tomorrow would be too much for my knee/IT band.  So I ran today.

Nothing major, just 3.5 miles.  I have to build my mileage back up and no sprints or pickups at all.  And yes it was miserable outside.  And yes I was happy that I ran.  I stretched and already knocked out my PT exercises for the day before my run, which meant that after stretching I could shower.  And then put on my glorious robe.  Ahhhh bliss.

I started breakfast because I was starving!  Oatbran, hooray! 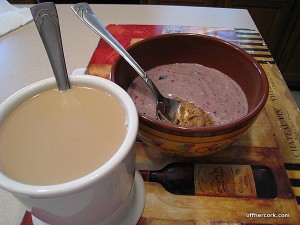 I added a pinch of brown sugar to the oatbran this morning because my bananas are a bit under ripe still.  I made berry oatbran with raspberries and blueberries.  So good.  I also mixed in a bit of vanilla almond butter.  I decided to treat myself.  The coffee was only so-so and I’m wondering if I put myself on coffee overload.  I’ll have to see how tomorrow goes.

After breakfast I started busting around the house cleaning.  I cleaned all the windows in the house, including the sills and the inside part.  I did not clean the glass that faces outside, that is saved for another day. After the windows it was time for lunch which was easy, easy. 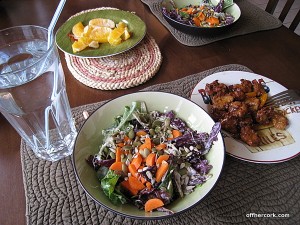 Dressed with a bottled Caesar dressing I bought at WF.  It’s made with yogurt and the nutritionals aren’t so bad.  An orange in the middle and some sweet and sour vegan nuggets.  Mmmmm!

After lunch, I cleaned and rearranged our TV room.  I needed a change!  That room is such a pain in my ass because it’s hard to arrange furniture around it.  I won’t go into details partly because I’m tired and partly because I don’t think my explanation would make any sense!  Once the finishing touches are made, I’ll take a picture.

There was a break in the rain where it was only mist, so I ran Rocky out for a quick walk.  When we got back, I pulled some leftovers out of the freezer to heat up and sat down to start this post.

I was famished by the time we sat down to eat. 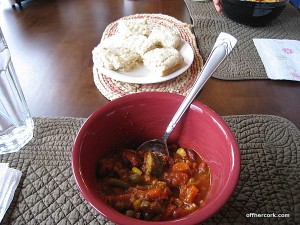 Veggie chili on this rainy gross day.  And I also made some cornbread!  YUM!  Which I took out of the oven when it was still slightly undercooked giving it a nice dense texture which tasted amazing.  And I used the ground flax + water trick and it worked perfectly.  Hooray!

Now guys I am wiped out.  I’m going to read for a bit before heading to SF class tonight.  Hopefully I won’t fall asleep during it!